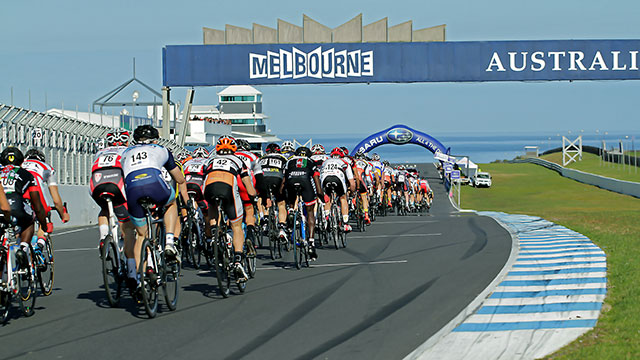 It was a beautiful sunny winter’s day on Phillip Island for the first 2 stages of the Lakes Oil 5 Day Tour of Gippsland. The first stage was a criterium in the morning around the streets of the small town of Rhyll. Start /finish line had been set up in Beach road on the south side of the town, with a nasty downhill corner before the short finishing straight. At 10-30am 139 riders left the start for an hour of fast and furious circuit racing. With only 3 laps left to go, Nick Aitken was caught up in a crash in the back straight, suffered a little skin loss and was able to continue in the afternoon. Anthony Giacoppo (HGP) won the criterium in a very close finish after a crash on the last corner. The second stage in the afternoon was 15 laps of the Grand Prix circuit. The race got underway at 2pm and was mostly uneventful on this unbelievably smooth circuit, until with 3 laps to go it was announced that a lone rider was making a break. That happened to be Stuart Smith. Stu kept the break going until being caught before the bell lap. (I was unable to get the images I came for, after being rounded up with others and told to leave the out-field.)