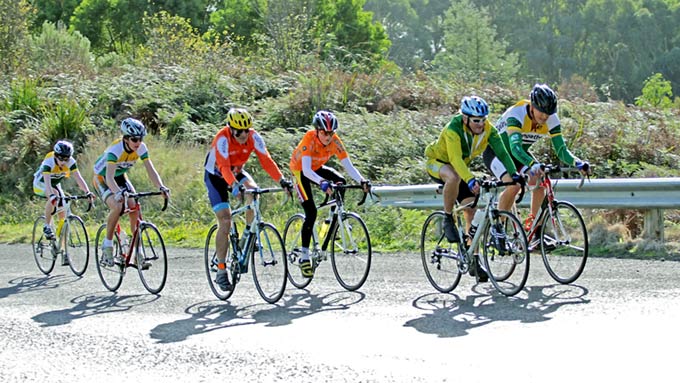 “In the B grade race there was a mixed field of masters and juniors.”

Saturday brought a cool and showery afternoon to the racing at Bena. With the preceding wet week and racing at the Country Titles scheduled for Sunday at Harcourt there was only a small field present. The weather stayed fine for the race duration and the starters were split into an A and B field.

“The A grade field stayed together swapping turns until around the ¾ way mark.”

The A grade field stayed together swapping turns until around the ¾ way mark. At this point Ronald Purtle increased the pressure on the climbs, especially out of the 180 degree turn at the west end of the small criterium circuit. Thomas McFarlane tried to go with the move but quickly saw a gap open up and Ronald was able to solo to a fine victory. The end of race pressure saw the field strung out as individual riders. Thomas crossed for a clear second while Dave McFarlane road away from Neil White for third place.

“At the line it was a clear win to the young legs of Will Lumby.”

In the B grade race there was a mixed field of masters and juniors. The field stayed together with several of the juniors sitting on the back and assessing how the racing with the masters would pan out. At the bell lap the field was still together so all were in with a chance. From the west end of the circuit it is a sharp uphill run before a little breather and then a further uphill run to the line. At the line it was a clear win to the young legs of Will Lumby. He was followed over the line by the oldest competitor, Kerry Pritchard for a good result. Then it was the Matt Minogue coming in for 3rd just ahead of Austin Timmins, Steve Wilson and Dave Bennett.