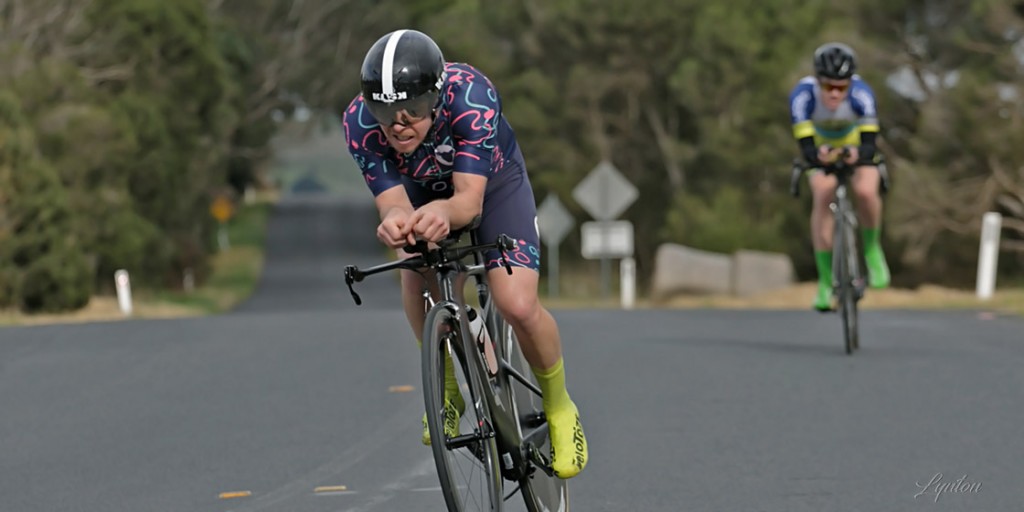 Brett on his way to record the fastest time in the Club ITT.
(32 event images)

Saturday was a busy day for the club officials as the Club conducted the State Individual Time Trial Titles for seniors and masters riders as well as running the club Time trial titles.  The racing was held at Kernot from 12.30 on a cold and windy winter day.  However, the rain stayed away so it was a much better day than last year for this event.  There were 77 entries for the State event.

The senior club title was run over 20km racing from Kernot toward Loch and turning 400m before the highway.  Much of the course is reasonably exposed to the wind so riders on their time trial bikes had to be careful and not get blown around.  In a close battle, Brett Franklin clocked the best time at 28min 10 sec at just on 42km/h.  Will Lumby was 2nd just 16 sec adrift whilst Harrison McLean was 3rd at 30.12 min.  The big improver for this season – Damien King was 4th at 31.26 min. Anthony Mitchell was 6th in 32.05min followed by Morgan Barnes 32.14, Phil Hanley 32.37, Gavin Slavin 33.05, Leigh Stott 34.13 and Alex Welsh in 35.44 sec.

In the Women’s section over the 20km course it was Bernadette Fitzgerald rushing from work just in time to race who was quickest in 36.05 sec.  Kerry Fitzgerald was next in 45.02 and Felicity Waddell just behind in 45.36 sec.

Alex Welsh followed his first effort an hour later with a ride in the State event and managed a time of 35.31 min which was a touch quicker and way in front of the other hand cyclist competing.  There were other disabled cyclists competing in other divisions as well as elite cyclists.  The quickest riders on the day were in the 25min mark.

Next weekend racing will be at Pound Creek for the McIndoe Cup. This will be over 2 laps of the circuit and is run as a scratch race event.