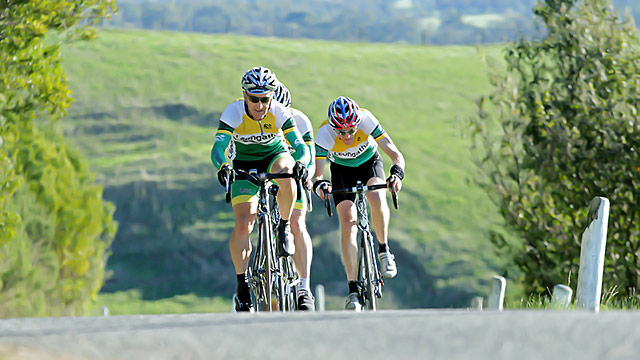 “…race up the Kernot-Krowera Rd”

Club racing was held at Kernot

Club racing was held at Kernot on Saturday and with road work on the Grantville-Glen Alvie Rd past the Candowie Reservior, officials were forced to seek an alternate race course – the outcome was to race up the Kernot-Krowera Rd and do right turns along the Loch Wonthaggi Rd and then into Grantville-Glen Alvie Rd before returning to Kernot. This resulted in a tough 21 km lap which included a 3km climb up to Krowera. Fortunately it was a pleasant and sunny winter afternoon so the corner stewards could enjoy the views even if the riders were labouring. The seniors raced 2 laps and the juniors 1 lap.

“However, the climb saw the field cross the top individually with Brett Franklin leading the way.”

In the senior race, lone scratch rider Brett Franklin was chasing 3 riders at 1 min, 4 riders at 6 min and a further 4 riders at 9.00min. By the time the riders reached the top of the climb at Krowera the first lap the limit bunch was down to 2 riders whilst the 6 minute bunch had closed the chase to around 2 minutes. Brett Franklin had picked up the 1 minute bunch and was driving hard. The down hill run toward Grantville saw riders hit 70kph. By the time the riders hit the base of the climb to Krowera the field was altogether with 9 survivors. However, the climb saw the field cross the top individually with Brett Franklin leading the way. At the finish it was a win and fastest time (1.05.45) for the 42km to Brett followed by Ronald Purtle, then Peter Hollins in 3rd place. It was an easy day for the judges. Next home was Thomas McFarlane, then Neil White, Jason Scott, Brad Bouquet, Rod Cheyne, David Bennett and Kerry Pritchard.

The junior field of 5 riders saw Austin Timmins on scratch, Matt Minogue at 1min, Hamish Bissett at 4 min, Alex Bennet at 7 min and Aaron Fraser on 8min. At the top of the climb it was Alex leading Aaron, followed by Hamish, Matt and close behind Austin. With a few climbs across the ridge on the Loch-Wonthaggi Rd there were still plenty of chances to close the gaps. However, the duo out front were not about to make it easy. At the finish it was Alex, showing a liking for the hills who chalked up his second win in a row, with a clear lead over Aaron. Just behind was Austin in 3rd and fastest time (43.04min). He was followed in by Matt and Hamish.