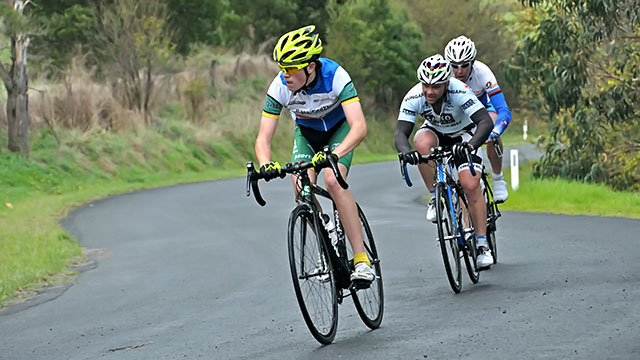 The 4min group (eventual winners) as they climb towards Gow’s corner on the first lap.       (40 event images)

Racing was run around the Korrine circuit on a mild Saturday afternoon with rain threatening.  Fortunately the racing was concluded just as the showers started to arrive.  The seniors raced 2 laps of the hilly circuit from Korrine through Lance Creek, the Kongwak roundabout and back via the Glen Alvie hills- around 35km.  A 3 rider scratch bunch had 20 other riders to chase down with 3 riders on 4min, 3 riders on 7 min, 4 riders at 10min, 3 riders at 15 min, 1 on 17 min and 1 rider on 25min.

After 1 lap Katherine Fitzgerald was in front but sister Bernadette, riding from the 15min bunch had left her co-markers and was riding well in second place.  The 10min quartet were still together but the gaps to the chasing bunched had closed substantially.  The 7min group of Leigh Stott, Phil Hanley and Lachlan Matthews were moving well but were under serious pressure from the 4minute trio of Clem Fries, Harrison McLean and Chris Rowe who were doing a good job of holding scratch at bay.  Clem was back from 3 weeks holiday in the US whilst Harrison and Chris were the best performers last week.  The second run back up the hills was just to Harrison’s liking as he dropped his co-markers and chased down the leaders to come home a clear winner in a time of 57.31 minutes.  Chris Rowe just edged Clem for the minor places.  Leigh Stott also showed last week he has a liking for the hilly terrain and came home alone in 4th place.  Phil Hanley clocked in for 5th, Michael Parks (10min) 6th, Lachlan Matthews 7th and Bernadette Fitzgerald (15 min) road home strongly for 8th. She was followed in by a hard sprinting scratch bunch with Brett Franklin edging out Stefan Kirsch and Will Lumby for 9th place and fastest time of 54.56min. 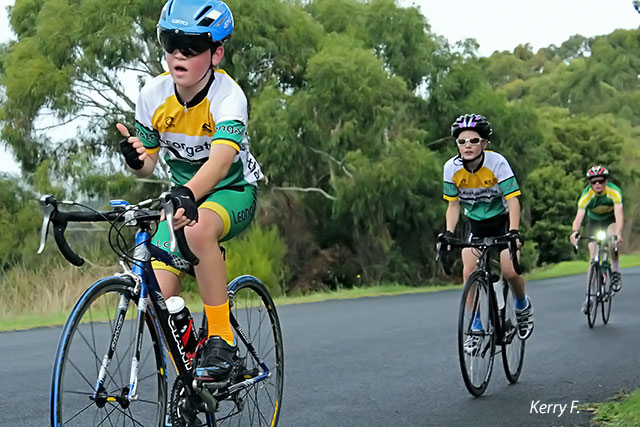 Oliver leads Thomas and Mitch on the return to the finish.

The junior riders were given a 14 km race involving an out and back run to the West Creek Rd corner followed by an out and back run to the Glen Alvie reserve.  Oliver McLean was riding from scratch chasing Mitch Harry and Thomas Fitzgerald on 1min, Kaleb Jans 3.30min.  Alfie Herbert 5.30min and Max Slinger and Sulli Herbert at 8 min.  After the first 4km Kaleb Jans had made the biggest inroad in the gaps whilst Oliver had Mitch and Thomas well within sight.  With a climb up to Glen Alvie the job was ahead of the limit riders to stay away.  However, the handicappers plans went awry at the Glen Alvie corner as the first 4 riders decided to take the right turn toward Kongwak and not proceed straight ahead toward the Glen Alvie reserve.  Kaleb Jans realised the error of his path but in the meantime the back markers went through to the turn at the reserve with Oliver making contact with Mitch and Thomas.  It came down to a sprint to the line with Oliver making it a McLean double for the day, winning narrowly from Mitch and Thomas. Kaleb claimed 4th.  The wayward trio raced through to the Kongwak roundabout where they were redirected for the finish line.  Alfie managed to win this run from Max and Sulli.

Next week the racing is at Pound Creek whilst on May 9 the club will join with the Caulfield-Carnegie club to race at the race track on Phillip Island. 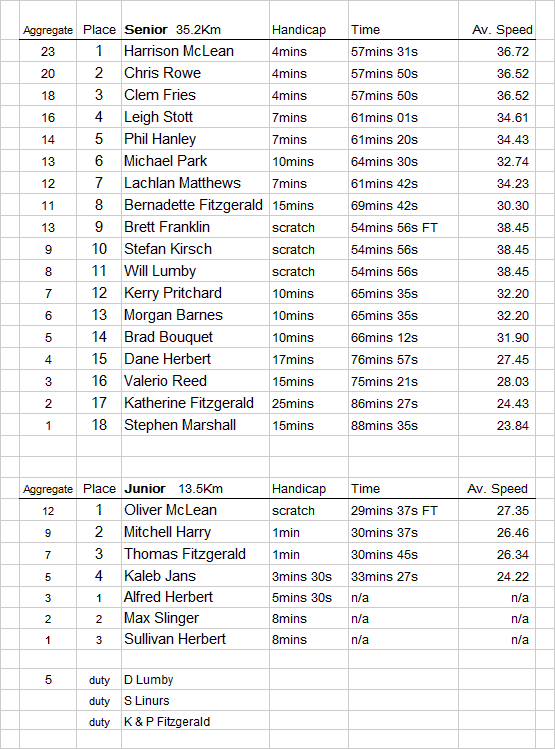