The Club conducted the annual road titles on Saturday at the Korrine circuit.  A cold north westerly to westerly wind was blowing making it a tough day for riding.  The senior field completed 3 laps of the circuit whilst the B grade field raced 2 laps, the junior 17 field 2 laps and the under 15 field raced 1 lap.  Unfortunately the winter flu impacted on rider numbers and meant that some of the age group fields were left short of starters.

There were 7 starters for the senior race and Brett Franklin and Stefan Kirsch attacked the field shortly after the start and raced round the first lap in 28 minutes leaving Peter Hollings chasing by himself, then Kevin Feely and Harrison McLean whilst Phil Hanley and Leigh Stott decided to also work together.  At the end of the 3rd lap it was still Stefan and Brett alone in front and with a head wind blowing at the line neither rider wanted to lead out the sprint.  In scenes reminiscent of a track sprint it was Stefan who opened the sprint first.  Brett had trouble with his gears momentarily and it looked like a win for Stefan but Brett came home fast to grab the win by a half wheel in a time of 1hr 28.33 min.  Peter Hollins managed to stay away from the chasers to take third in 1hr 31.10min.  Kevin Feely showed the benefit of his 3000km in Italy to finish strongly in 4th at 1hr.32.28.  Then it was Harrison, Phil and Leigh.

In the B grade race there was some attacks up the climbs just to soften up the opposition but they decided to sensibly race as a bunch with 5 riders basically together at the business end of the race.  Brad Bouquet won the bunch sprint from Kerry Pritchard, Bernadette Fiztgerald, Steve Wilson and Morgan Barnes.  Rod Cheyne and Damien King were able to finish together whilst Mark Bensley was busy using his GoPro camera to record some of the action as well as having some mechanical issues.

The Under 17 race numbers were impacted by the winter woes leaving just 3 starters.  Austin Timmins was able to take the win from Grace McLean and Mitchell Harry.  Austin’s time was 1hr 5.39mins. 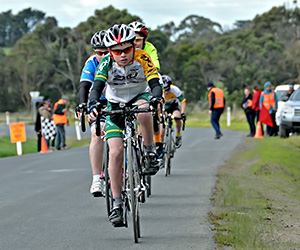 “In the Under 15 race, the run to the first corner at West Creek saw several of the riders struggle with the tempo…”

In the Under 15 race, the run to the first corner at West Creek saw several of the riders struggle with the tempo set by Oliver McLean and Thomas Fitzgerald so it was no surprise that as the raced up the first hills on McGraws road that these 2 slipped away from the others.  It was only on the last climb up to the Glen Alvie corner that Oliver was able to put some distance between himself and Thomas.  The finish saw Oliver take the win in 38.00min.  Thomas was 2nd in 38.26min whilst Kaleb Jans rode well for 3rd with Michael Eastwood 4th and Felicity Waddell in 5th.

Next weekend racing is at Pound Creek so hopefully a few will be over the winter blues and can make use of the undulating circuit for some good racing. 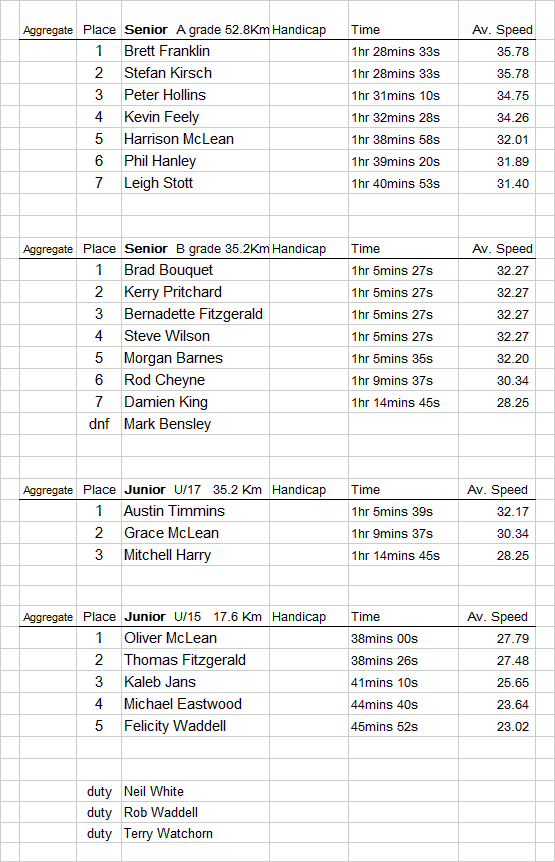