‘A’ grade as they start 3laps of the Korrine circuit. (46 event images)

The 2016 road season started with graded scratch races at Korrine on Saturday. There was a light westerly blowing and conditions were mild and great for racing. There is only racing next Sunday before the Club holds the Junior Experience Weekend at Wonthaggi and Outtrim on the Saturday and Sunday of the Anzac weekend. The public are warned that on Sunday the 24 April there will be lots of riders in the Outtrim area.

The riders have been busy over autumn putting in plenty of training so the racing was pretty intense on Saturday. The A grade field of 10 riders raced 3 laps of the circuit giving them around 54km of racing. This gave them hills to negotiate and at the finish of the last climb there were just 2 riders in contention – Stefan Kirsch and Harrison McLean with Tom McFarlane around 100m adrift. In the dash to the line it was Stefan taking a narrow win over Harrison, Tom third then it was Will Lumby who was saving a little for the Sunday race. 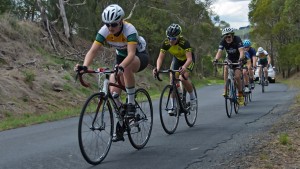 In B grade there were 9 riders and they raced 2 laps. Oliver McLean broke away on the first lap and the pressure of the hard racing and hills saw 2 riders lose contact on the climb up to the Glen Alvie corner. Some strong riding by Mark Bensley and Kerry Pritchard saw Oliver back with the bunch as they rolled through after the first lap. The second lap again saw the hills impact on the field. This time it was Darcy O’Connor who went with Oliver up the hills and gain a break. These two raced into the line where Darcy recorded a solid win over Oliver. Next home was Bernadette Fitzgerald followed by the evergreen Kerry Pritchard. Kobi Merchant out-sprinted Mark Bensley to be next in for 5th and 6th.

“Up the hills it was Thomas Fitzgerald and Kaleb Jans who rode away from the bunch.”

In the C grade race over 1 lap we saw the juniors set the pace. Up the hills it was Thomas Fitzgerald and Kaleb Jans who rode away from the bunch. They stayed clear and in the dash to the line Thomas scored the win over Kaleb. Next in was Jack Allen having his first road race. He was followed in by Greg Bradshaw and Zach Stubbs-Taylor.

Next Sunday the weekend race will start at Pound Creek with entries in by 8.30 am. The club has shifted from the Saturday race at this location to avoid the football traffic on a Saturday afternoon.