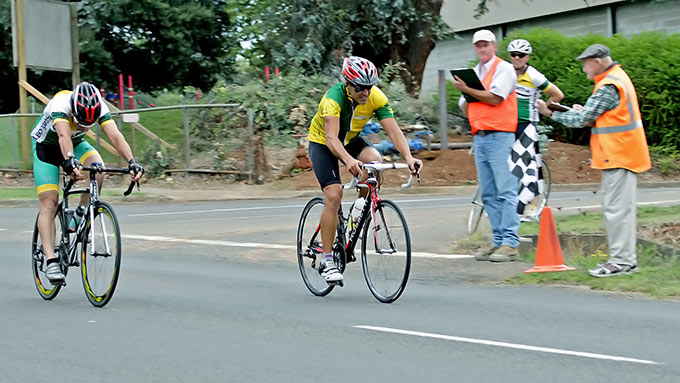 “Phil Camenzuli was the first of the scratchies at 8th and had the fastest time, Phil Hanley was 9th”

“The main story was about 14 year old, Will Lumby.”

It was a day of high winds from the north-west but otherwise OK as the rain held off and it was quite warm. The main story was about 14 year old, Will Lumby, who held on for 20 km behind freshly returned veteran Kerry Pritchard over the steepish climb to Mardan… then on the ride back into Leongatha he blew him away over the last 1 ½ km to the finish at the Secondary College! We are very pleased that Will is showing such good hill-climbing skills at such a young age and he appears to have a bright future in cycling.

“The nine minute group of Kerry Pritchard, Mark Bensley and David Bennett took off fast but broke up in the hills to Dumbalk.”

The others in the 38km race struggled with their handicaps in the strong winds. The six man scratch bunch gave away 5 minutes to a 4 man group who in turn gave away another 4 minutes to a 3 man group. Will Lumby was sent off 6 minutes in front of the 9 minute group and took his time to reach the climb up to Mardan. The nine minute group of Kerry Pritchard, Mark Bensley and David Bennett took off fast but broke up in the hills to Dumbalk. Kerry alone caught Will so he and Will rode alone until the edge of Leongatha when Will made his winning move, Kerry Second.

In the meantime Tony Clark did most of the work at the front of the 6-man scratch bunch into the strong headwind back into Leongatha but none of that group was able to catch the 5 minute bunch. The 5 minute bunch rode strongly too and all finished within 6 seconds of each other, Neil White 3rd, Rod Cheyne 4th, David Lumby 5th, Cameron Wyatt 6th. Mark Bensley then came in 7th ahead of the fast finishing scratch bunch. Phil Camenzuli was the first of the scratchies at 8th and had the fastest time, Phil Hanley was 9th and rounding out the top 10 was Kevin Feely.
Five juniors lined up for an out and back race along the road to Dumbalk. Austin Timmins gave away 2 ½ minutes to Hamish Bissett, 3 min to Aaron Fraser, 4 min to Alex Bennett and 5 min to Matt Winchester. They finished in the order Hamish, Alex, Aaron, Austin then Matt.