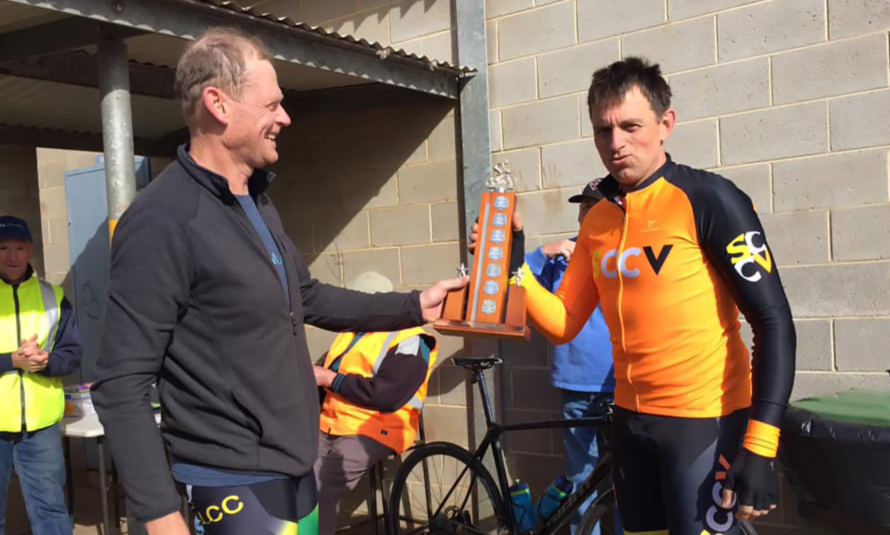 Sunday morning saw the club hold the George Martin Memorial handicap race around the tough Nerrena-Mardan circuit. Fortunately, the overnight rain had cleared and the sun was shining. However, the riders had temperatures at just 12C and a strong and gusty wind blowing. This was particularly strong across the ridge tops at Mardan. Even on the downhill runs the riders had to work hard into the wind.

The handicapper had a small field of riders and placed Mark Bensley and Tony Giles on 15 min. They were followed by the trio of Chris Rowe, Brad Bouquet and Peter McLean on 10minutes. Another trio – Steve Allen, Cameron Brown and Thomas Fitzgerald raced from 6 minutes and Chris Joustra and Oliver McLean were on scratch. At the turn for the climb up to Mardan, the limit markers had given up half their lead to the chasing trio who had similarly lost ground to Steve Allen and Cameron Brown with Thomas Fitzgerald just loosing contact with this duo. The scratch riders had made up some time but would need to fly up the 6km climb to Mardan if they were to feature in the results.

The ridge top run from Mardan saw the limit riders losing some cohesion in their efforts whilst Steve and Cameron continued to power on. They soon picked up the second limit bunch and caught the limit markers just as the hit the bottom of the O’Shannessy Hill climb. They continued to press on and reached the finish line at the Secondary College with a handy lead over the scratch riders allowing a comfortable sprint for line honours. Steve Allen was able to take the win ahead of Cameron in a time of 1hr 9min 47 sec. Chris Rowe took 3rd followed by Peter McLean 4th,, Mark Bensley 5th, Brad Bouquet 6th and then Oliver McLean 7th and fastest at 1hr, 6min 23 secs. Chris Joustra was 8th, Thomas Fitzgerald 9th and Tony Giles needing a puncture repair before finishing in 10th.

Whilst the seniors were racing, Stephen Spencer and Bastian Jefferies raced out the Nerrena Rd with Stephen having a 2min start on Bastian. All went well until the turn where Bastian had a fall and was unable to finish the race leaving Stephen to have the win.

Next weekend the Gippsland Titles are being held on the Sunday at Heyfield. On Saturday the club has a social ride scheduled from 9.00am for an out and back ride on the rail trail with a coffee get together after the ride. All cyclists are welcome.