Riders had a great winter Saturday afternoon for racing with plenty of sunshine and just light winds as they tackled the hilly Leongatha North race circuit.  With several top junior riders racing at the Shepparton Junior Tour and a few struck down with the seasonal cold it was fortunate that the Club was able to welcome some riders from Warragul and the Latrobe Valley. There were 18 in the senior field and 10 in the junior field.  The seniors raced 2 laps for a 36km race whilst the juniors raced the 1 lap.

Robyn Baker (Warragul) was the first away at 20min.  She was followed by Dane Herbert and Geoff Fraser at 18 min and Dane was rearing to go as he had a borrowed bike which weighed in at just 7.4kg.  They were chased by a trio on 11 min, 5 riders on 7 min, 4 riders at 4 min and a trio on scratch.  After the first lap Dane was out in front and going well.  His presence had given Robyn a boost and she was also holding her own.  Scratch had closed around 1 min on second scratch whilst the big movers were the 4 min bunch.  By the time they went around the corner near the Velodrome the 4 minute bunch had nearly closed down the 11 minute bunch and the 7 minute bunch.  However, they had to keep working hard or scratch would track them down.  From Leongatha back to Leongatha North there is the steady climb up Crightons Hill before the last steep climb up to Leongatha North.

The climb saw only the hill climbers make it through to the finish as a bunch, however they were only sprinting for 3rd as Dane Herbert was a clear winner – his first win (67.16 min), ahead of Robyn in 2nd place.  In the dash to the line it was the wily masters rider Geoff Thomson (Warragul) who took the honours from Luke Morrison (Brunswick), Dan Bowler – all from the 4 minute bunch, then in 6th place was Michael Park (7 min) just ahead of Chris Rowe (4 min). 8th place went to Steve Wilson, 9th to Bernadette Fitzgerald and Rob Waddell in 10 th place just edging Tony Giles.  Thomas McFarlane was the first scratch rider in in 12th and fastest time – 53.56min.

In the Junior race we had 3 Herbert family members start.  Harry Herbert joined brother Sullivan and Max Slinger on 13 minutes as the limit riders.  They were followed by Alfie Herbert and Felicity Waddell on 6 min, Kaleb Jans and Boyd Makepeace (Latrobe) on 2 min, Thomas Fitzgerald and Mitch Harry on 1 min and Oliver McLean on scratch.  Sullivan was keen not to let younger brother Harry show him a clean set of wheels and put in his best ride to date to come home a clear winner (44.35 min) and make it a Herbert double.  Harry also put in a fantastic first up ride to come home in 2nd place.  It was almost a Herbert trifecta with Alfie being edged out by Boyd Makepeace at 3rd.  The back markers were not far behind with Oliver McLean taking 5th and fastest (35.24min).  Thomas Fitzgerald out-sprinted Kaleb Jans at 6th and 7th. Max Slinger who was in third place at the start of the climbs managed to come home in 8th, Felicity 9th and Mitch at 10th but with the 5th best time beaten by the handicap – work for the handicapper.

Tuesday night the Club has a meeting at the Leongatha RSL – 7.30pm whilst next Saturday the club will race the George Martin Trophy race around the Nerrena- Mardan circuit with the start at the Leongatha Secondary College. 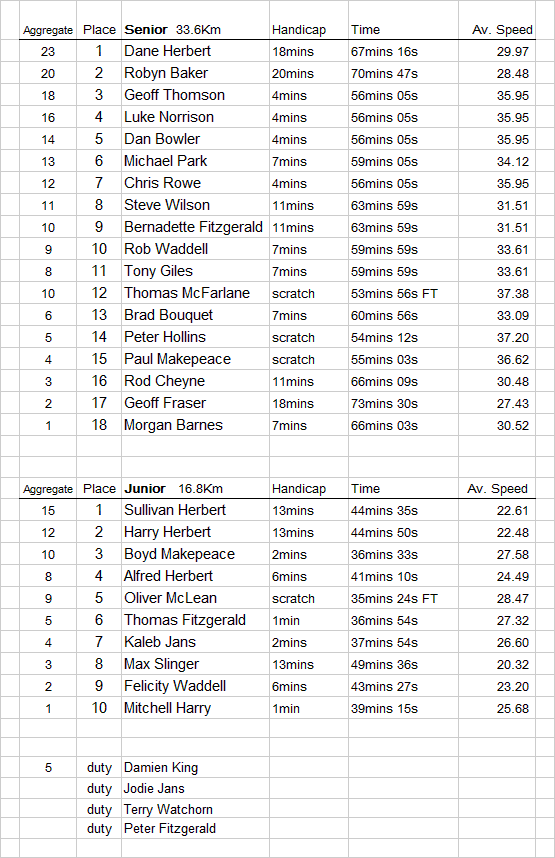