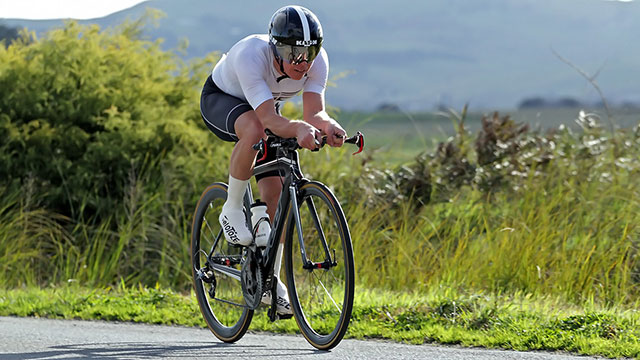 On Saturday the Club held racing at Outtrim, conducting time trials on the run between the reserve and Leongatha South.  As usual the club had warning signage out to help drivers understand that there was a race in progress, however this has not stopped a driver in a charcoal coloured 4 wheel drive from hitting one of the riders from behind, tearing the fastening clip from his shoe and just avoiding a serious injury for the rider.  What was worse is that this driver did not stop to check whether the rider was OK.  We ask this driver to contact the police and indicate they were in control of the vehicle involved.

On a good afternoon for racing, the club also had several para-cyclists compete in the time trials.  The club riders started at 30 sec intervals which meant that the seeded and fastest riders starting toward the last of the field had plenty of riders in front.  With a 10 min spread over the times it was a competitive afternoon.  Best time went to Brett Franklin with a superb 27.43min time for the 20km run averaging 43.30kph.  In second place was Stefan Kirsch at 28.38min.  The battle for 3rd place was extremely close with Harrison McLean scraping in with 30.32 just ahead of Will Lumby 30.36 and Austin Timmins 30.45min.  In 6th place was Kevin Feely at 31.08, 7th Phil Hanley 31.57, 8th Peter Hollins 32.17, 9th Morgan Barnes 32.34 whilst 10 th place went to the evergreen Rod Cheyne in 33.48min.  This was an amazing outcome for Rod as he had a fall in March and broke his pelvis so it is remarkable he is back competing so well.

For the Para-cyclists there were just 3 starters but they all enjoyed the course and the race.  Slickest mover was Michael Taylor in 36.04, followed by Alex Welsh 37.02 followed by Kerryn Harvey at 39 21min.  Mike and Alex are both hand cyclists lying in a carbon-fibre sled.   Kerryn has just the one arm to support her on the bike.  They all have averaged over 30kPh – fantastic.

In the following event, a hill climb up Mt Misery (3km), the winner in A grade was Brett Franklin in 9.21min, just edging out Will Lumby in 9.22 and Austin Timmins 9.23.  Peter Hollins was next home in 9.43 whilst the 5th home was Harrison McLean at 9.54.  In the B grade field, it was a win to Bernadette Fitzgerald at 11.43 ahead of Peter Hanley, Tony Giles, Mark Bensley and Kerry Pritchard.

Oliver in action during the Junior 12Km ITT; winning both the ITT and the Hill climb.

The junior riders raced a 12 km time trial and then a 2km climb up Mt Misery.  Tom Fitzgerald had trouble with his chain just after the start which cost him some precious seconds and put him out of the placings.  The winner was Oliver McLean at 22min 50sec.  Next best was Mitch Harry at 23min 57 sec.  Kaleb Jans clocked in at 25min whilst Tom was at 25min 06 sec.  They were followed by Alfie Herbert, Harry Herbert, Max Slinger and Sullivan Herbert.

In the hill climb the result was again a close call.  Oliver McLean took a narrow win in 7.52 from Tom Fitzgerald 7.55.  Next home was Kaleb at 9.22, followed by Mitch, Alfie, Harry, Sullivan and Max.

Next week’s racing is at Korrine with the seniors racing for the “Sprag trophy”.  Assembly at the tennis courts at 1pm.  The club has a monthly meeting at the Leongatha RSL at 7.30pm on Tuesday night.