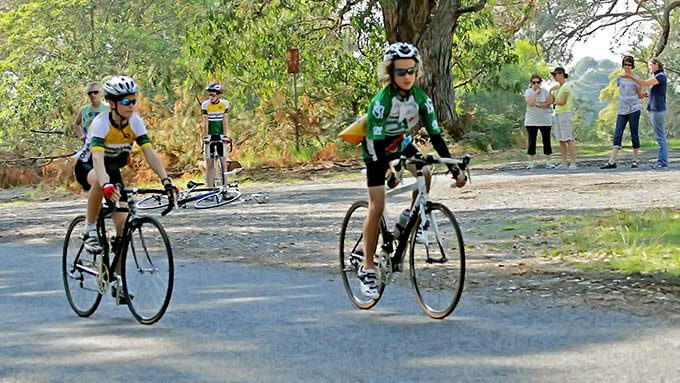 Hamis and Aaron get underway in the Junior event at Outtrim on a warm autumn day.

It was a brilliant Autumn day for racing around the challenging Outtrim circuit on Saturday. Light winds and warm sun meant that the out-markers were going to have an advantage this week over the scratch men, however the tough 2km climb up to the Mt. Misery saddle would always be the deciding factor.

Five junior riders entered for a couple of laps of an out-and-back course along the Outtrim-Inverloch Rd. Matt Winchester set off first on 3 minutes. He was chased by Alex Bennett on 2 minutes, Hamish Bissett and Aaron Fraser on 1 minute and Austin Timmins alone on scratch.

After one lap the gaps had closed and all riders were in sight of each other as they turned for the second lap. Matt was still leading nicely as took off on the downhill section. Alex had been caught by Aaron and Hamish and it looked like those three could work together to achieve a victory for one of them.

However it was the big scratch man, Austin, who powered through the others to record a strong win, and fastest time, from Hamish in second and Aaron third.

“Youngsters Will Lumby and Matt Minogue lead off on 13 minutes.”

The senior riders were split in to 5 groups by the handicapper. Youngsters Will Lumby and Matt Minogue lead off on 13 minutes. They were followed 3 minutes later by David Bennett, Mark Bensley and Tony Giles. On 8 minutes were Dave Lumby, Brian Cuman and Cameron Wyatt, making a welcome return to racing after a few years in the wilderness. Second scratch saw the defending champion on this circuit, Chris Rowe, ably supported by Jason Scott and Kevin Feely. Chasing alone on scratch after last weeks emphatic victory at Pound Creek was Brett Franklin.

The gaps were coming down after the initial climb up the hill to the Korumburra Rd and the tough climb to Gows corner. Brian Cuman had broken a spoke and would not figure in the finish. The out-markers were caught and the back-markers were closing.

“The bunch started to fragment along Stewarts Rd back towards the foot of the climb.”

By the end of Lynnes Rd it was all together apart from the lone scratch rider Brett Franklin who was chasing hard. Unfortunately for Brett he had missed the all important rider briefing before the race and took a wrong turn around Kongwak, thus eliminating himself from the race.

The bunch started to fragment along Stewarts Rd back towards the foot of the climb. Waiting at the saddle the officials could see the riders slowly appear around the final corner, some pushing hard out of the saddle, others struggling as the fatigue of racing set in.

In the end it was Chris Rowe who took the win for the second year running from Jason Scott and young Will Lumby. Chris also had the fastest time.