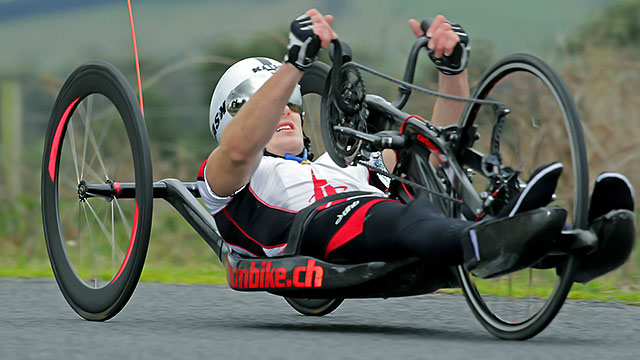 Alex Welsh in action during the ITT.

Saturday racing was at Outtrim for the running of the season’s time trial – the race against the clock. Riders assembled and warmed up in rather balmy conditions but just before the 2.00pm start time the air took on a cooler feel. The senior riders all started in fine conditions and had all turned at the Leongatha South halfway point before the rain arrived and the temperatures dropped. By race end – some 18 minutes later – the temperature was down to just 5 degrees. The race program for the day was to firstly do the time trial then start for a second race – the dash up nearby Mt Misery. However with all riders wet and cold there were no starters for another race. The race officials certainly did not push for the race to proceed.

Adverse conditions for the return.

The club had Alex Welsh, a disabled person competing as a hand cyclist and he clocked in a respectable 41.50 for the junior. Keep your eye out for Alex as he trains on the roads. His cycle is a low slung sled just millimetres above the road and identified by several flags. 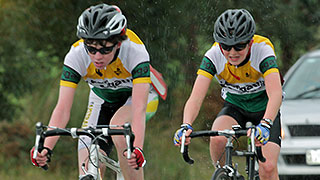 A wet and cold Matt and Alex.

The junior riders were unfortunate with their starting time as it was delayed to make sure there was no conflict with their turn point and the senior riders returning past that point. The delay resulted in them starting in the rain and suffering the worst of the temperature drop. Best time went to Austin Timmins for the 12km run – a time 23.25. He was not far ahead of Matt Minogue in 24.08. They were followed by Aaron Fraser 25.50, Alex Bennett 27.44 and Matt Winchester 30.27.
report by Lindsay Love.