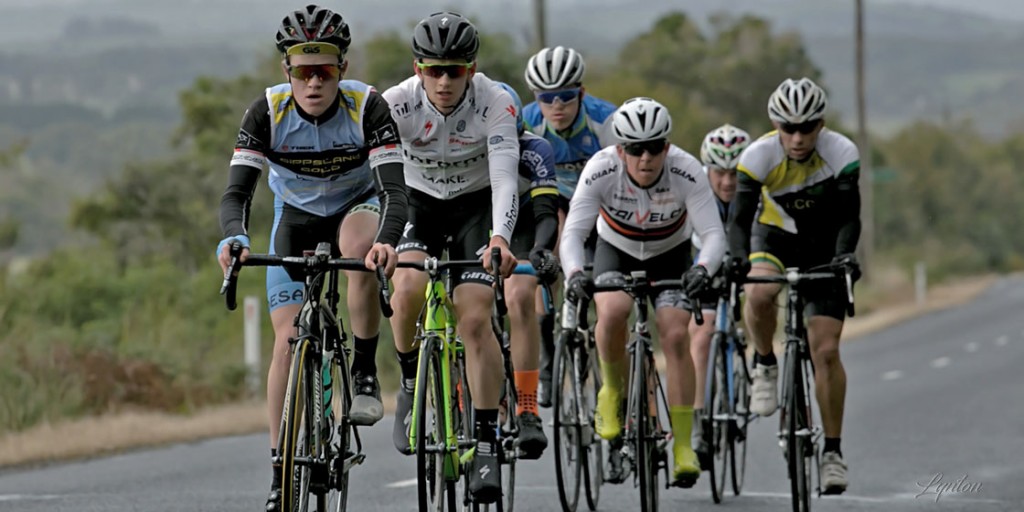 A grade on the Golf Club hill. (32 event images)

Club racing saw riders endure some winter weather the temperature dropping to single digits, some light showers and a steady wind.  The riders were competing in the club Road Championships with racing from Pound Creek.  It was reasonably sheltered adjacent the fire station but out on the circuit the wind was cold and energy sapping.

The seniors raced 2 laps of the circuit (total 51km) and the seven riders kept the pace on all the way. The second climb up the golf course hill saw a couple of riders lose contact so that the final dash to the line on the Pound Creek Rd was contested by just 5 riders.  Thomas McFarlane, better known for his track speed, had too much speed for the others and won from Will Lumby and Brett Franklin. Harrison McLean finished in 4th just ahead of brother Oliver.

“Phil ride away to power home alone for a convincing win.”

In the B grade race, also over 2 laps, Phil Handley turned up for the first ride of the season after doing a holiday ride from the bottom of Italy to the top of Italy, including doing several of the mountain climbs used in the Tour of Italy.  On the first lap he powered away with Damien King keeping him company and a very determined Morgan Barnes running a lone chase. The second lap saw Phil ride away to power home alone for a convincing win. Meanwhile, Morgan Barnes caught up with Damien with just a couple of kilometres left and managed to grab 2nd with Damien in 3rd.  Mark Bensley rode a largely solo race for 4th whilst the other starters said the cold and one lap was enough.

In the C grade race, Alex Welsh on his hand cycle sled was not so troubled by the wind as he sits just a few centimetres above the road.  With Just 1 lap to ride he made his move over the golf course hill splitting the field and also having a convincing win. Next home was Peter McLean followed by Greg Bradshaw and Kerry Fitzgerald.

In the Junior race, Thomas Fitzgerald had Kaleb Jans, Caleb Murphy and Felicity Waddell all working well and sharing the job of riding into the wind, content that he could cover the final sprint moves.  In the dash to the line it was a convincing win to Thomas followed by Felicity with a narrow margin over Kaleb Jans and a further gap to Caleb Murphy.

Next week the racing will start at Leongatha north and race out to Trida and return so should suit the hill climbers.  There is also a meeting on Tuesday night at the RSL to review the recently prepared club strategy plan.