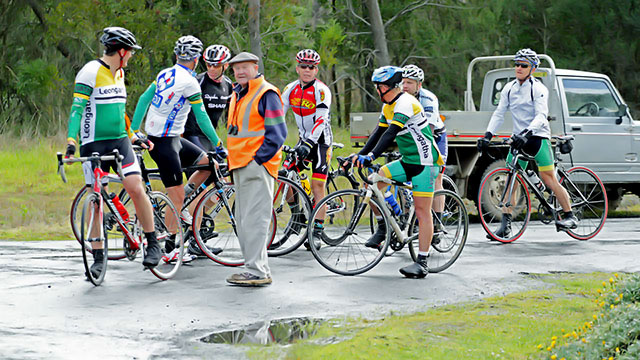 About to get underway for the Lex Watt trophy.

The school holiday’s resulted in a small number of Leongatha Cycling Club riders competing for the Watchorn and Lex Watt trophies at Pound Creek on Saturday. The strong winds of the morning gave way to cold rain bands in the afternoon, had riders finishing cold and wet.

“Brett Franklin on scratch had to work hard…”

The senior handicap race for the Lex Watt trophy was 51Km over two laps of the Pound Creek circuit. Brett Franklin on scratch had to work hard to make up the four minutes to Peter Hollins who was also riding on his own, with another two minutes to the next group of four riders. At the completion of the first lap Brett had reduced the margin considerably, but still hadn’t caught Peter and the main group were still unsighted. However by the Leongatha Golf Club hill on the second lap Brett had caught the main field, which then overtook the remaining limit riders before the Bass highway. Brett powered home for a convincing win despite the handicapper in the fastest time of 1hr 18 mins 32secs. Neil White sprinting to take second place from a group of six riders with Phil Camenzuli in third, followed by Will Lumby, Steve Wilson, Kevin Feely and Chris Rowe.

The Junior event was down to just two riders who contested a handicap race for the Watchorn trophy, an out and back race over 9 Kilometres with Alex Bennett off 3mins winning from Austin Timmins on scratch.