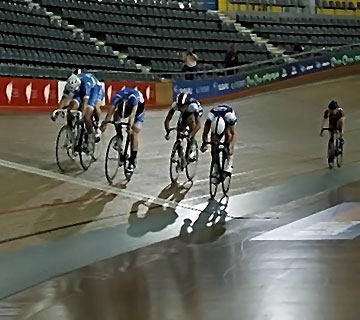 Thomas on the outside winning gold in the Kieran 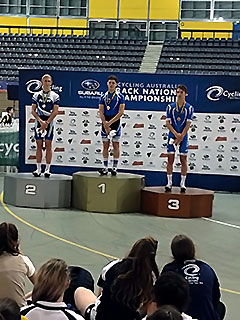 “bronze in the sprint”

Thomas McFarlane has completed a great couple of days at the Sydney National junior track titles. After claiming a gold medal in the M17 team pursuit on the first day and a bronze in the sprint on day 2 he has set the track on fire on the last day winning gold in the Kieran and the team pursuit. The Victorian M17 team were the dominant force in their age group and completed a superb effort at the Titles. Club coach Tony Smith was on hand to see his star pupil record some outstanding results. Thomas’s dad, David, was also able to be on hand as he was the team mechanic for the meet. Well done and congratulations to all. – Lindsay Love.