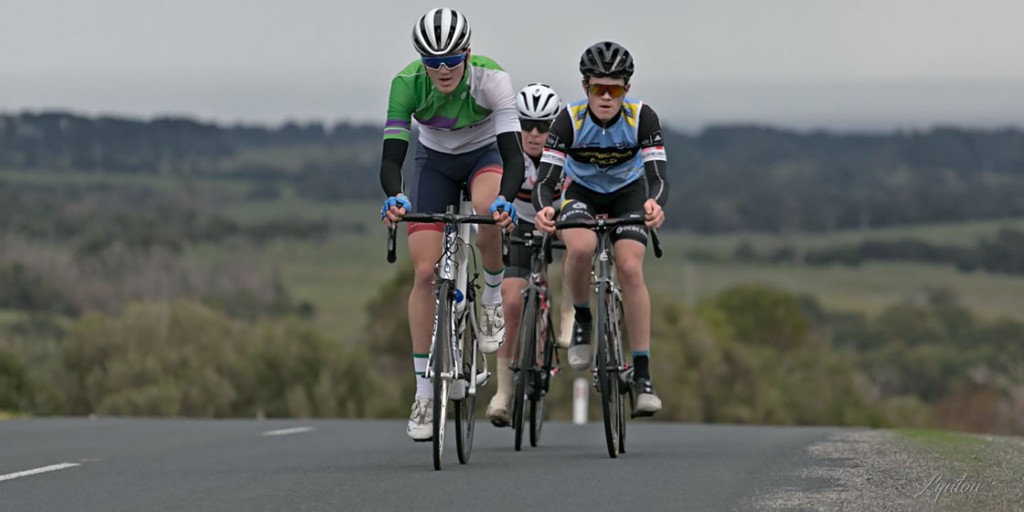 The scratch group of Will Lumby leading Harrison McLean and Brett Franklin as they climb the ridge at Cape Liptrap.

It was a windy and cold winter day with showers about for the intrepid soles who fronted for club racing at Tarwin Lower on Saturday.  The A grade field had a 43km ride out to the top estate at Walkerville so they had to climb the hill up to the Cape Liptrap turn both ways.  The three rider scratch group of Brett Franklin, Will Lumby and Harrison McLean were chasing a duo on 4 mins, six riders on 7 minutes and another 4 riders limit at 12 minutes.  The club welcomed Gavin Slavin and Rod Cheyne for their first ride of the season.  It was pleasing to see Rod on the go after a serious accident at work.

By the time the riders reached the turn, the 2km climb up to the Cape Liptrap turn had split the bunched.  Kerry Pritchard and Bernadette Fitzgerald from the 12 min bunch were first around.  They were followed closely by the balance of the lead 4 and the first of the 7 minute bunch with just 3 now working together. The 4 minutes duo of Oliver McLean and Leigh Stott were close behind but more threatening was the scratch trio who had made up around 8min of the limit handicap.

The run back to Tarwin Lower saw the scratch trio gradually pick up riders as they toiled into a head wind.  By around 5km to the finish, the leading trio of Thomas Fitzgerald, Brad Bouquet and Kevin Feely were chased down and a bunch sprint to the line was set up, much to the chagrin of the judges.  Will Lumby triumphed with first and fastest (1hr 5min 32 sec).  Next was Harrison and then Brett. Oliver McLean was close in for 4th with Thomas Fitzgerald at 5th, Morgan Barnes 6th, Michael Park 7th, Leigh Stott 8th, Gavin Slavin 9th and rounding out the top 10 was Kevin Feely.

The B grade riders had a 32km ride out to the cross road with the Walkerville-Buffalo road.  Kaleb Jans was on scratch chasing 8min to Greg Bradshaw and Kerry Fitzgerald.  The wind and 2 against one meant it was a lonely day for Kaleb as Greg took the win after dropping co marker Kerry on the hills at the wind farm.  However, Kerry managed to hold on for 2nd and Kaleb a close third and fastest time.

Thanks to Peter Fitzgerald who cooked sausages at the BBQ whilst the race was on; the riders were able to warm up and talk about the race after the event.  Next week the race starts at Woolamai race track and the race is around the GlenForbes gorge circuit so another day to suit hill climbers.  The Club is also looking for ideas to engage new members.  Give us your thoughts – maybe cyclocross, maybe weekday ladies rides, maybe group rides with some coffee stops, maybe some maintenance nights.  All ideas welcome.

Lindsay
results
no other event images!