Friday night saw the best field for the season and it helped with the running of two trophy races.  A mild evening with a gusty breeze did not help the cause for riding personal bests but several riders turned in new personal bests in the opening 1 lap time trials.  Kaleb Jans (43.33) and Josh Wright (45.08), both getting used to new bikes put down personal bests whilst Bernadette Fitzgerald, also on a new bike took a second of her time at 34.80 sec.
In the 5 lap junior scratch race there were 8 starters, including new rider Michael Eastwood.  Club referee Lindsay Love had some concerns about the field but the young riders performed well so all the training helps.  Oliver McLean took the win from Thomas Fitzgerald whilst Kaleb Jans showed great understanding of the race to get past Fleur Timmins in the final straight to take third.

In the senior 8 lap scratch race, there were 10 starters and the pace was on all the way.  Will Lumby was keen to challenge Austin Timmins but Austin had the speed up the home straight to take the win whilst Kevin Feely was the best of the others in third.

Les Minns handicap trophy
In the re-handicap the riders raced for the Les Minns Trophy.  Les was a supporter of the Club in its early days. New rider Michael Eastwood (35) with the first ride under his belt found a new set of legs as he blitzed the field to win by 3 lengths from a consistent Kaleb Jans (15) and Thomas Fitzgerald (10).

In the senior field they raced an out-markers and a back-markers heat to get a 6 rider final field.  In the final the limit riders, Katherine Fitzgerald (170) and Grace McLean (130) kept the pace and even though the back-markers were sailing home at a great rate they held on to their lead. 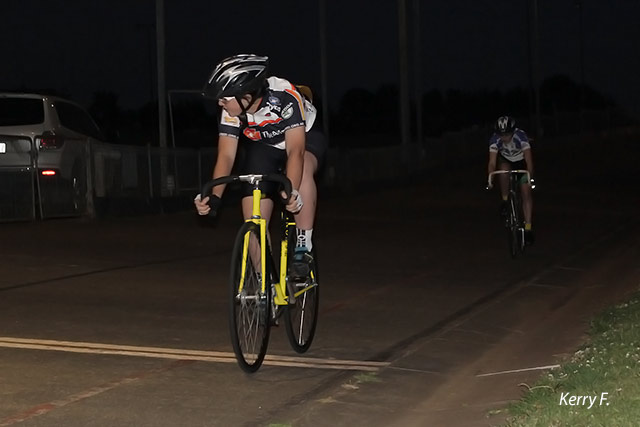 “Grace McLean edged past Katherine to win the Williams Cup”

Grace McLean edged past Katherine to win the Williams Cup whilst Will Lumby (10) took third place. The Williams family were another of the Clubs founding supporters.
The junior riders had 4 rider teams take up an Olympic sprint and it needed the stop watch to sort out the winners after the 2 laps.  The winning team was Oliver McLean, Kaleb Jans, Jack Allen and Josh Wight.  The senior riders who missed the handicap final raced a 1 lap dash. Steve Allen took the win from Michael Park and Rob Waddell.

The senior riders then had an elimination and this race was a beauty.  With a field of ten riders it was a big bunch to sprint around and riders were keen to get the aces – Austin and Will, boxed in and hopefully eliminated early.  However, it was these two fighting out the last sprint with Austin taking the win.  Harrison McLean also rode well to take third. 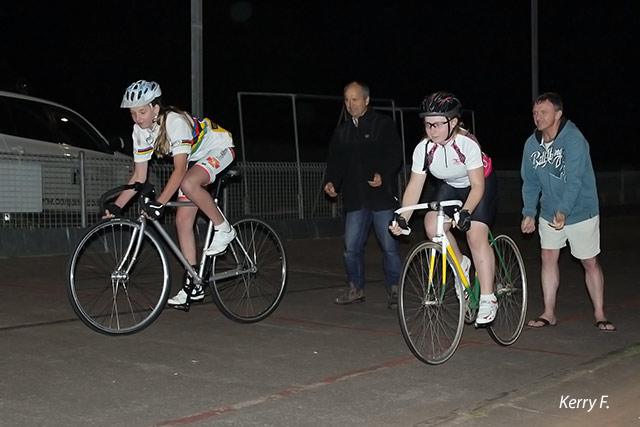 “In the battle of the girls, Fleur Timmins was too good for Felicity Waddell”

The juniors had some sprint rounds. Michael Eastwood was continuing his good night as he took the first heat win.  In the battle of the girls, Fleur Timmins was too good for Felicity Waddell whilst Oliver Mclean took the last heat.  The senior sprint heats saw the first heat go to Kevin Feely with a narrow result ahead of Rob Waddell.  In the second heat it was a close affair with Harrison McLean getting the win ahead of Michael and Bernadette.  In the final heat Will Lumby tried all his tricks against Austin and looked a chance but Austin again had the answers.
The final races – scratch races for each group, rounded out a big program of races.  The junior 4 lap race saw Oliver McLean win from Thomas Fitzgerald with Fleur Timmins taking third.  In the senior 8 lapper, there were surges and recovery but the field was still in tact at the bell.  In the dash to the line Austin held of the challenges to win from Will and Kevin.  This race was run in 5.02 min whilst the first scratch race was raced in 4.40min so the dynamics were quite different.

Next week will be the last Friday for the year and will conclude with a sausage sizzle and some Christmas cheer.  Several riders will be racing the Austral meeting at Hisense Arena on Saturday night so we look to the other members to be on hand Friday night to make a good final night of the year.  We wish our Melbourne contestants good luck.  Wednesday night training is on again this week.  A reminder to anyone getting a bike from Santa that we will be back in action from Fri Jan 16 so it is never too late to come and try out at the track.