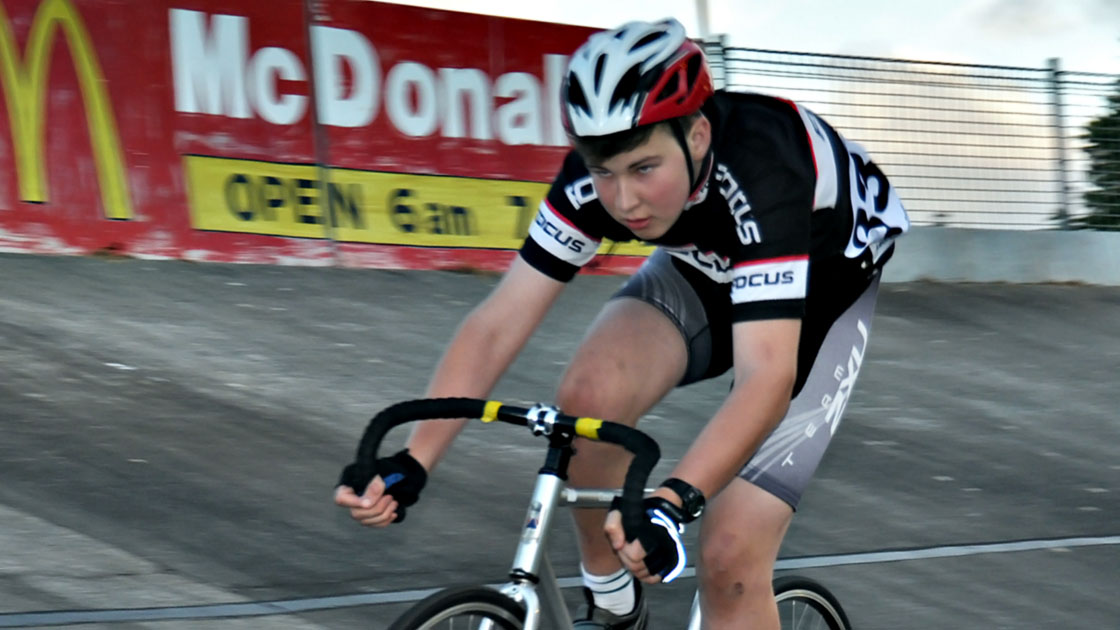 Michael on his way to record 39.09sec

Friday night was another great night of closely contested racing for the good field of riders and the start of a busy weekend for many of the Club members.  As well as Friday night many riders were in action early Saturday for the Bass Coast Challenge at Inverloch whilst others were competing in Melbourne.

As usual the first event of the night was the 1 lap time trial and the riders are keen to see if they have set a new personal best.  Kevin Feely, Felicity Waddell, Boyd Makepeace, Kaleb Jans, Thomas Fitzgerald, Oliver McLean, Sulli and Harry Herbert and Josh Wight all put in a new season best showing that the training and racing is making a difference.  In the senior ranks Steve Allen 32.61 sec was best followed by Dylan Adams 33.50 and Bernadette Fitzgerald 35.33sec.  In the junior ranks it was Oliver McLean best at 36.89sec ahead of Thomas Fitzgerald 38.15 and Michael Eastwood 39.09sec.

The riders then had short scratch races for the next event.  The junior B scratch over 3 laps saw a win to Jack Allen from Harry Herbert and Sulli Herbert.  In the Junior A grade 4 lap race it was Oliver winning from Thomas and Kaleb Jans.  In the senior 6 lap scratch race, Steve Allen controlled the race pace and took the win from Kevin Feely and Bernadette Fitzgerald.

The junior riders had to race a heat of the handicap to make the final.  In the first heat Josh Wight (30) had a narrow win from Boyd Makepeace (40) and David Eastwood (60) whilst in the second heat it was Felicity Waddell (45) winning from Oliver McLean (Scr) and Harry Herbert (55).  In the final Felicity Waddell sensed it was her night as she powered into the back straight to quickly round up the out markers before heading to the line a clear winner.  Josh Wight tried hard all the way to secure 2nd with Oliver flashing home to snatch 3rd place.

In the senior 2 lap handicap, Dane Herbert (80) wound up the big gear and made full use of his handicap to come home with the win from Kevin Feely (55) and Rob Waddell 45).  The junior riders who had not made the final were given a 3 lap race and the win went to Thomas Fitzgerald ahead of Michael Eastwood and Kaleb Jans.

Next round of racing were elimination scratch races where the last rider over the line each lap is withdrawn from the race.  This makes for a sprint effort each lap so riders have to be fit and watch their position early on.  In the junior B grade, Jack Allen rode well for the win ahead of Josh Wight and Sulli Herbert.  In junior A grade it was another win to Oliver with Thomas making him work hard for the honours.  Kaleb Jans also rode well to secure 3rd place.  In the senior race the last few laps were very hotly contested and in the end it was the better fitness that saw Steve Allen out last Dylan Adams for the main placings. Kevin Feely was most pleased to have taken 3rd place.

With the night moving on the last senior race was a 10 lap scratch race.  The bunch was nearly all there at the bell lap with several moves being made.  However, Steve Allen was able to power to the front down the back straight and hold on for the win.  Bernadette Fitzgerald flashed home around the outside to take second ahead of Rob Waddell in a good bunch finish. 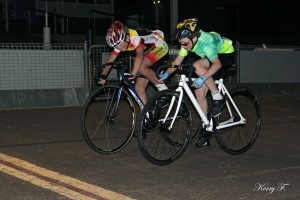 Junior sprint rounds – Boyd had a narrow win over Josh

The junior riders had a round of sprint heats.  Harry Herbert had as win over David Eastwood, Boyd Makepeace a narrow win over Josh and Sulli.  Michael Eastwood a win over Jack Allen and Felicity Waddell whilst Oliver McLean kept his score sheet impeccable for the night with a win over Thomas and Kaleb.

Training is held Wednesday night at 6.30 provided it is not raining.  Novices are invited to try out and see what the sport is all about.  The Club has bikes for riders to test the sport.  Next week could be a bit quieter as many riders will be at Maryborough for the HPV event.

Riders and members are reminded that the Annual General Meeting is on Tuesday night at the car club rooms at the Leongatha Reserve at 7.30pm.  Be involved – it is your Club so nominate the people you want to take the Club into 2016.