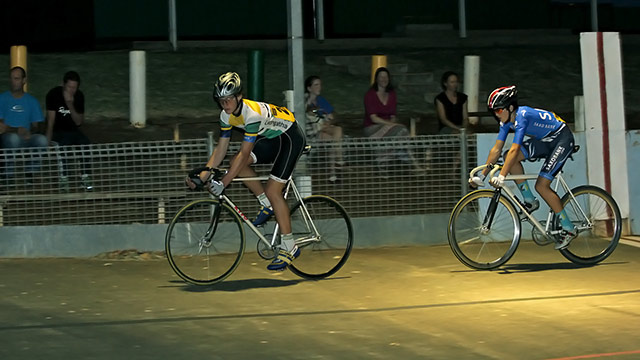 Additional racing after the Championships – A match sprint between Austin and Will.    (52 event images)

Great conditions for Friday night track racing saw the Club hold the 2014 Track season club titles.  Unfortunately a few spills in the previous week took a couple of riders out of action so we hope they will be back in action next week.  One rider back from an extended break was Grace McLean and whilst she still had some speed the fitness and endurance was well down.  The Club members, especially the junior girls enjoyed a meeting and talk with past women’s champion Melissa Berryman.  Melissa was able to give the girls an idea of life in the Australian team training and racing in the mountains of Italy.

The Club champion is awarded on points accrued over 3 events – time trial, sprint and scratch race.  The first event of the night was a time trial. The Under 13 riders raced just the 1 lap and quickest was Fleur Timmins just ahead of Thomas Fitzgerald, Oliver McLean and Cody Cox.  Coxy was on a change of bike – a full size bike with 700C wheels so managed to improve on his previous efforts.

In the Junior U15, the riders raced over 500m which is 100m more than the lap.  It was a win to Austin Timmins (41.5sec) ahead of Grace and Alex Bennett.  In the Under 17 section it was a narrow win to Matt Minogue (42.02 sec) ahead of Harrison McLean and Bernadette Fitzgerald.  In the senior section it was a win to Thomas McFarlane (37.00 sec) ahead of Ronald Purtle and Will Lumby.  For comparison, Thomas clocked 34.2 sec on the indoor velodrome last week, almost 3 sec better than the outdoor track.

The second event was the sprints.  In the junior U13, Oliver McLean was keen to turn the results around winning his heat and then the final.  Fleur Timmins took second whilst Thomas Fitzgerald had to work hard against Cody to secure third place.  The under 15 sprint saw a convincing win to Austin Timmins ahead of Alex Bennett and Grace McLean.  In the under 17 division, Matt Minogue and Harrison Mclean won their heats to move into the final.

“In a tense final, Harrison got the break on Matt and looked the winner but a last desperate lunge to the line by Matt saw him grab a narrow win.”

In a tense final, Harrison got the break on Matt and looked the winner but a last desperate lunge to the line by Matt saw him grab a narrow win.  Bernadette secured the third place.  In the senior sprint, Thomas McFarlane were watching each other intently heading toward the bell lap when Will Lumby made the break along the inside.  However, Thomas was not to be outdone and duly chased down Will and going on for the win over Ronald and Will.

Down to the last event and in the Junior U 13 it was still anyone’s title.  The scratch race over 3 laps saw the bunch stay together until the last lap. Oliver Mclean had the answers for all challengers and took out the win from Thomas Fitzgerald and Fleur Timmins.  This was enough to get Oliver the title ahead of Fleur, Thomas and Cody.  In the Under 15 division, Austin Timmins made a clean sweep of the events to secure the title from Alex and Grace.  In the Under 17 scratch race, Harrison McLean lead out the final lap to claim the win however, Matt Minogue had a narrow point win for the Title over Harrison, Bernadette and Matt Winchester.

The senior scratch race over 10 laps saw the riders finish in their title finish order.  A win to Thomas McFarlane from Ronald Purtle and Will Lumby.

“The riders were still keen for some more racing so a girls sprint was held.  This went to Grace from Bernadette and Fleur.”

The riders were still keen for some more racing so a girls sprint was held.  This went to Grace from Bernadette and Fleur.  In other sprints Will Lumby proved too quick for Austin whilst Matt Winchester claimed a win on the line over Alex Bennett.  The junior B riders organized an Olympic Sprint and in a close affair, Oliver and Fleur had the win over Cody and Thomas.

Training will again be held on Wednesday night before a normal track night on Friday night.  Club members are reminded there is a club meeting at the Love residence on Tuesday night.  The road season program will be up for discussion.  Have your say and come to the meeting.

report by Lindsay Love.
from the archive – Melissa Berryman