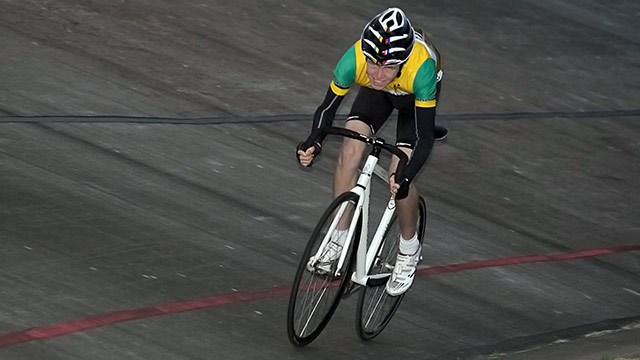 Harry in action during the Individual time trial. (35 event images)

It was a busy weekend for Leongatha Cycling Club members beginning on Friday night with track racing for 17 starters on a cool and breezy night.  This was followed by the Bass Coast Challenge charity bike ride at Inverloch on Saturday for some whilst our top juniors were battling it out over Saturday and Sunday at the National junior Track Series event in Melbourne.  The club had Thomas McFarlane, Austin Timmins and Will Lumby competing at this event so they were all missing from action on Friday night.

As usual the first event of the night was the 1 lap time trial.  The riders are all keen to see if they can clock a personal best and with regular Wednesday night training the riders usually manage to keep clocking in best times. Josh Wight recorded a 46.26 which was almost 3 sec ahead of last week.  It was a similar story for Kaleb Jans at 46.56sec.  These two new riders are helping to forge a great crew of Junior B riders. Best time for the group was Oliver McLean 40.15sec, followed by Fleur Timmins 40.94 and Thomas Fitzgerald 41.77sec.

“In the re-handicap event it was a win to Jack Allen (45) from a fast finishing Oliver McLean (Scr) and Kaleb Jans (30) also finishing well to grab 3rd place.”

In the Junior A division, the racing is just as competitive with Bernadette Fitzgerald 35.67 sec ahead of Grace McLean 36.79sec and Alex Bennett 39.01sec. In the senior field it was Ronald Purtle at 31.41 sec, followed by Steve Allan 32.56 and then a tight time split for the rest of the field with 3rd best going to Harrison McLean at 33.48sec.

The riders returned to the track for short scratch races.  In junior B over 3 laps it was a win to Oliver ahead of Fleur and Thomas.  In Junior A over 5 laps Grace McLean rode home strongly to take the win from Alex and Bernadette.  In the senior 8 lap race Ronald Purtle took the honours from Dylan Adams and Steve Allen in a closely contested finish.

Into the handicaps and in Junior B over 1 lap the first race went to Kaleb Jans (40m) from Josh Wight (50) and Thomas Fitzgerald (15).  In the re-handicap event it was a win to Jack Allen (45) from a fast finishing Oliver McLean (Scr) and Kaleb Jans (30) also finishing well to grab 3rd place.

The senior 1 lap handicap saw Michael Park (45) race away for a clear win with Harrison McLean (40) in 2nd and Dylan Adams finishing fast claiming 3rd. The second handicap was over 2 laps and this time the scratch rider Ronald Purtle took the win from Dylan Adams (35) and Steve Allen (10).

“Kaleb Jans was too quick for Josh and Jack.”

A round of sprint races was next on the agenda.  In the first race, Kaleb Jans was too quick for Josh and Jack.  In the second it was a clear win to Oliver ahead of Thomas and Fleur.  In junior A, Alex Bennett took the honours in a close tussle with Matt and Kathryn.  In the second race it was Bernadette finishing over the top of Grace taking the honours, The senior sprint races were also keenly contested with the first giving Lachlan Matthews a win over Michael Park whilst in the second race Steve Allen made the smart move at 300m out to go on for a clear win over Ronald and Dylan.

The Junior B riders are always eager for racing so they were put into 2 teams of 3 riders for an Olympic Sprint.  This race also elicits much barracking.  The winning team was Fleur, Thomas and Kaleb in a narrow result ahead of Oliver, Josh and Jack.

The junior A riders finished the night with an elimination.  This resulted in a win for Grace ahead of Oliver and Bernadette.  The last race for the Junior B saw Oliver back into action straight away after racing up a division and he grabbed the win from Thomas and Fleur.  The senior 4 lap scratch race saw the fittest rider in Dylan Adams take the win from Ronald Purtle and Steve Allen.

Club members are reminded the Annual General meeting is scheduled for this Tuesday night and the car club rooms at the Rec reserve from 7.30pm. Members should come along and have an input into the club.  Ronald Purtle the current Club President is retiring after doing a great job over the past year.  So if you like your racing then be like Ronald last year and step up an give it a go, it’s really not that hard and is a good bit of fun to be fully involved in your sport.