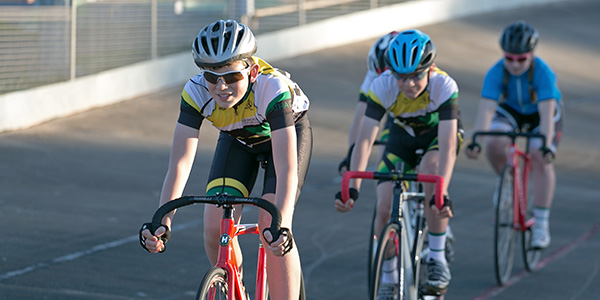 Track racing at the Velodrome continued on Friday night in fine but cool conditions with yet again a small field participating.

First up was the one lap time trial with no riders improving on their personnel best times in the cooler air of the night. Best of the juniors was Oliver McLean with 34.7 sec ahead of Thomas Fitzgerald in 36.4 sec, Felicity Waddell (40.21), Jack Allen (40.55) and Kaleb Jans (41.12). The seniors saw Rob Waddell with 36.92secs edge out Kevin Feely recording the slightly slower time of 36.99 secs.

In the first of the junior one lap handicaps, it was Felicity Waddell on 45m who held off the fast finishing Thomas Fitzgerald, Kaleb Jans and Jack Allen for a clear win.  In the reheat it was Thomas Fitzgerald who got up from scratch to the win from Kaleb Jans (45), Felicity Waddell (35) and Jack Allen (40)  The first senior handicap was won by  Rob Waddell (25) from Oliver McLean (scr) and Kevin Feely (15). In the reheat it was Kevin Feely (30) who won from Rob Waddell (20 and Oliver McLean on scratch.

Jack and Kaleb ready to start an Olympic sprint.

After a couple of Olympic sprint events, an all-in elimination race was held with Oliver McLean winning from Kevin Feely and Thomas Fitzgerald with the rest of the field being eliminated.

The last events and highlight of the night were motor-paced with the juniors up first racing over six laps. With the motor bike coming off the track with one and half laps to go it was Felicity Waddell with strongest legs who won from Kaleb Jans and Jack Allen. The senior motor paced was over 12laps saw Oliver McLean winning from Kevin Feely and Rob Waddell.

The Club’s annual general meeting was held on last Wednesday night. There was a change of president with Mark Bensley taking on the role and past president Peter McLean accepting the secretary position. The Club wishes to thank Dylan Adams for his commitment as secretary over the past year.