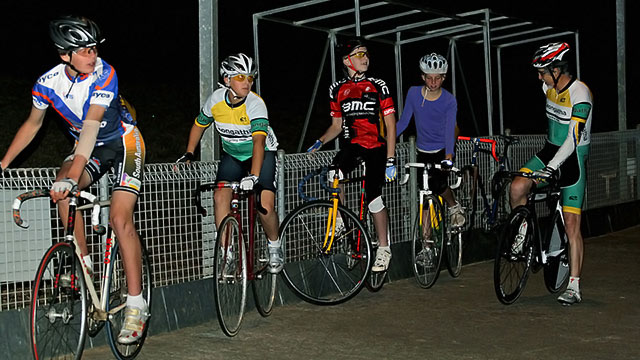 A cool and windy night on Friday meant that riders had little chance of posting personal best times. With several riders away it was left to a consistent few to make the racing.  First event for the night was the 1 lap time trial and Matt Minogue with a 35.74 sec lap was best time.  He was followed by Kevin Feely at 35.95, Austin Timmins 38.81 sec,

Short scratch races were the second races and with a spread in abilities it was Fleur, Alex and Matt Winchester doing a 3 lap race as the first group.

Matt Winchester was fired up for a good night and after the bell he was happy to lead the race and counter the moves.  With a fighting effort down the finish straight he held on for the win from Alex and Fleur.  In the other race it was Matt Minogue, Kevin and Austin with a short 4 lap race.  At the bell it was Matt leading out with Kevin on his shoulder and Austin tucked in behind.  Whilst Matt opened the sprint early this perhaps played into Kevin’s hands as he had the bigger gear and the sit out of the wind.  By the finish it was a clear win to Kevin from matt and Austin.

The handicapper was busy for the next as he set them out on a 2 lap handicap.  Fleur was out on 250m and smiling broadly before the start. Kevin was on scratch and chasing riders at 30m, 60, 140, 160 and out to Fleur.  At the finish the field had come together but it was still a clear win to Fleur, followed by Alex and Matt Winchester.

The handicapper rearranged the marks with Fleur pulled back to 200m followed by riders at 150, 120, 80, 50 and Kevin on scratch.  Austin was geared up to bridge from 80 to 120m  and moved away with intent but pulled the foot out of the pedal so ruined his chances.  Matt Minogue on 50m was not deterred and rode really well to chase the gaps down.  Into the straight it was anyone’s race but Matt was finishing well and claimed the win from Matt Winchester and a fast finishing Kevin in 3rd place.

After the efforts of the handicaps the riders were grouped for an Olympic sprint.  Kevin, Fleur and Alex versus Matt, Matt and Austin.  The first lap saw a reasonably close race but the back straight team of Matt, Matt and Austin had a lead of around 25m.  Matt Minogue put in big effort to ensure Kevin did not bridge the gap and lead his team to the win.

“Sprints were still on the agenda”

Sprints were still on the agenda.  First heat was Alex, Matt Winchester and Fleur over 2 laps.  Matt was keen to continue his good efforts for the night and once again was the faster finisher claiming the win from Alex and Fleur.  In the other heat it was Kevin proving too quick for Matt Minogue and Austin.

Down to the last ride of the night – an elimination and Fleur decided not to race.  This changed the race dynamics and saw brother Austin the first eliminated.  It was then a battle between Matt Winchester and Alex and this time Alex positioned himself better and made it through another lap.  However that was enough to see him collect 3rd place.  In the final battle it was Kevin who prevailed over Matt Minogue.

Next Friday will see the last ride for track season so it will be a short program followed by some Pizza and talk.  Thomas McFarlane will be back from his duties at the National and will be able to show of his gold medal from the Olympic sprint.  He was one of the 3 member Victorian team who overcame a confident NSW team in the final which needed the electronic timing to resolve the win.