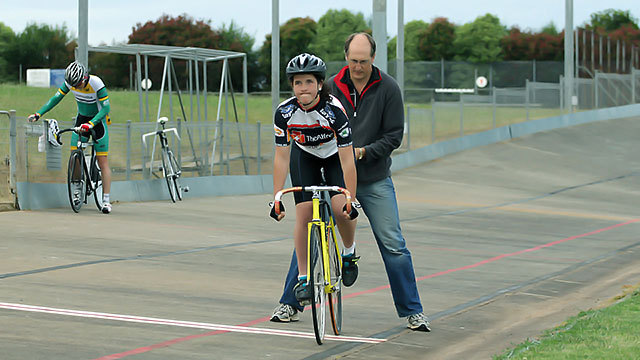 Track racing for 2013 concluded on Friday night with riders having great conditions for racing. This enabled a number of riders to post personal best times for the 1 lap time trial. These riders have been working hard at training on a Wednesday night and have made some great improvements in their performances. In the junior women section there is a great rivalry between Grace McLean and Bernadette Fitzgerald and both clock pb’s – Grace at 38.18 and Bernadette at 38.39. Fleur Timmins also carved a big gap of her time to ride a 42.85 sec. In the junior boys Alex Bennett who built up some strength riding the Great Vic bike ride has gone from riding over 40 sec laps to 38.99sec whilst Austin Timmins who has also been doing a Tuesday night on the ergo machine with coach Tony Smith dropped under the 34 sec mark with a 33.94 sec. Another second of this time would see him competitive at State level. It is a similar story for Thomas Fitzgerald in the junior B boys. Thomas comes to training and works really hard and has also been on the road bike using the rail trail. He has pulled hi time from just under 50 sec to clocking a 46.47sec which is really great considering he is on a heavy 24 inch bike.

“In the scratch races the Junior B race was taken out by Oliver McLean.”

In the scratch races the Junior B race was taken out by Oliver McLean from Jack Allen and Thomas Fitzgerald. In the women’s scratch race a clash of wheels saw a fall and 2 riders hit the deck. Unfortunately for the keen Grace a trip in the ambulance for some X-rays was the outcome. Bernadette was able to bounce wearing a few abrasions and bruises.

The Junior A scratch race over 4 laps had a continuation of the Matt and Austin battle. Austin showing a great improvement is riding craft was up to the task winning from Matt and Alex Bennett. The senior scratch race over 6 laps was run at a brisk pace and the dash to the line saw Thomas McFarlane take the honours over Steve Allen and Kevin Feely.

The junior B 1 lap handicap first round saw Thomas Fitzgerald (40) get the result in a blanket finish from Cody Cox (70) and Oliver McLean(scr). In the second round it was Oliver McLean(scr) taking the win from Fleur Timmins (10) and Cody Cox (60). In the junior A handicaps round 1 race went to a tearaway Harrison McLean(25) from Zoe Veldman (50) from the Latrobe City club whilst Austin (scr) flashed home around the outside of the field to snatch third. In the second round it was matt Minogue (10) who found another gear who grabbed the win from Zoe (45) and Alex Bennett (60).
The senior handicap over 2 laps saw the lone scratch rider, Thomas McFarlane, giving away a big start and while his chase was really good it was 10m short so that Steve Allen (55) took the win from Kevin Feely (100) and Eric Veldman (80) Latrobe City club.

With a sausage sizzle almost done the night finished with another round of scratch races. The Junior B race over 3 laps saw Fleur win from Oliver and Jack Allen. In the Junior A section over 6 laps it was another good win to Austin from Matt and Zoe. The senior race over 10 laps had plenty of pace applied through the middle stages and this shook Eric from the field. At the finish it was Thomas winning from Steve and Kevin.

The club managed to induct a new lap scorer and bell ringer in Damian Minogue who after some coaching managed to get the bell ringing under control. This will put pressure on David Winchester who has been missing in action, to recover his position in the New Year. Winner of the raffle prizes were David McFarlane and Steve Wilson.