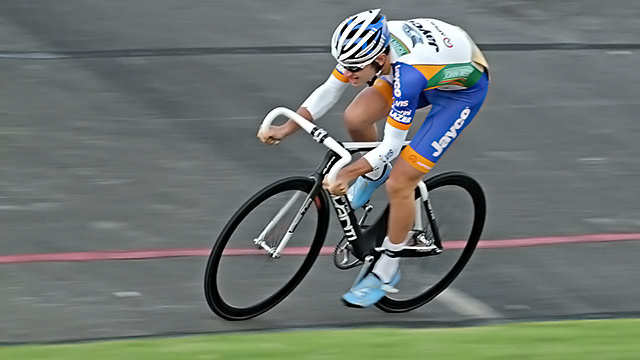 Thomas easily secured wins in all 3 categories to become the Under 19 Club champion.    (55 event images)

A mild and basically wind free Friday night saw the club conclude the 2015 Track season club titles with the running of the Under 19 and senior titles.  Star performance for the night came from Thomas McFarlane as he whistled around the track to set a time of 35.65 sec for the 500m time trial in the Under 19 division being 3 sec quicker than any other competitor on the night.  The club championship is awarded on the basis of a points tally over 3 events – time trial, sprint and scratch race. Following the great start to the night Thomas easily secured wins in the sprint and scratch race to secure the Under 19 club champion.  Harrison McLean put in some good rides but had to settle for the silver medal whilst Bernadette Fitzgerald took out the bronze medal.

Junior A scratch race – “Austin Timmins held out a strong finish from Will Lumby.”

In the senior division, racing was a much tighter affair.  In the 500m time trial, Steve Allen had a narrow win at 40.43 sec from Lachlan Matthews 41.27 and Dylan Adams at 41.90 sec. Into the sprint rounds and Steve Allen used his devastating capacity to accelerate quickly to account for the challengers to take a win in the sprint as well. Lachlan Matthews came away with second in the sprint and Dylan was again 3rd.  In the scratch race, Steve Allen made sure of his title by also taking the win.  However, second place went to Dylan with Kevin Feely in 3rd place.  The overall result saw Steve as senior club champion with Dylan and Lachlan equal second and Kevin in 4th place.

The junior also had racing and the junior A grade saw Austin Timmins clock a 38.85 sec for the 500m time trial ahead of Will Lumby, 39.15 sec- both slower than last week in their title rides.  In the junior B grade, Oliver McLean was at 39.22 sec, Michael Eastward 41.49 and Fleur Timmins at 42.99 sec, for their 1 lap time trial.

The junior B grade 4 lap scratch race saw a win to Oliver ahead of Michael and Fleur whilst in A grade juniors Austin Timmins held out a strong finish from Will Lumby with Grace McLean taking third ahead of Matt Winchester.

The junior B 1 lap handicap saw a win to Max Slinger (60) just ahead of Michael Eastwood (15) and Caleb Jans (10).  In their 2 lap handicap it was Jack Allen (100) who hit the line first.  Fleur Timmins fought hard to take second whilst Oliver McLean flashed home for third.

In the Junior A 1 lap handicap, Will Lumby (15) was quickly away and rounded up the leaders into the straight for the win ahead of Matt Winchester (80) and Grace (40).  In the 2 lap handicap, Austin Timmins made the most of the generous handicap (25) to chase down the limit markers and take the win from Grace (120) and Will Lumby (scr).

To finish out the night the junior B riders raced an elimination.  Oliver Mclean made sure of the win whilst Michael Eastwood grabbed second ahead of Caleb Jans.  The last race of the evening saw all the other 12 riders race an elimination.  Thomas McFarlane rode a smart race controlling the pace up front and moving away with a few laps to go.  The only riders able to answer the challenge was Austin so that when Steve Allen secured third place it was down to a sprint to the line for Tom and Austin.  Whilst Austin tried to come around he was still a half bike length in arrears at the line.

Track training is on again on Wednesday night with only 2 track race nights left for the season end.  Last weekend, Club masters rider Ben Meadley raced at the State titles and picked up placings in the pursuit and scratch race.  Also in action at state events was club hand cyclists, Alex Welsh.  In trying terrain at Bright, Alex has taken out the race in his H3 division.  Well done Alex.
report by Lindsay Love