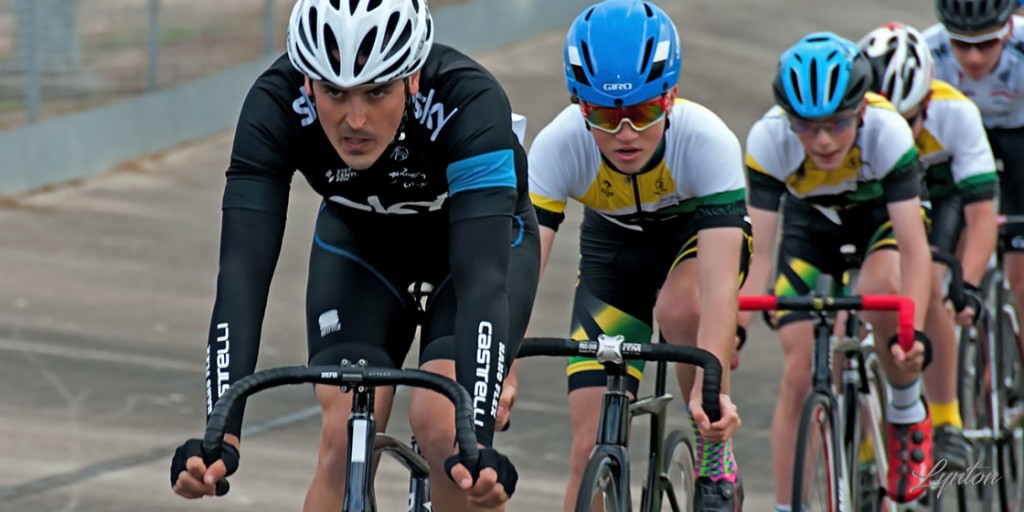 The 2017 track season moved from training to racing on Friday night.  The earlier rain had passed and whilst it was cool with a light wind it was pretty good conditions for racing.  The juniors were missing and still on holidays, but there was a good field of A grade riders.  Several riders put in personal best times for the 1 lap time trial to start the night off.

In the A grade section, Thomas McFarlane (30.37 sec) had to put down a good ride to stay ahead of Will Lumby (30.54sec new PB).  It was a similar situation with Harrison McLean (32.14sec) having his first ride for the season just managing to stay ahead of brother Oliver (32.68sec new PB) and Dylan Adams (33.22sec).  Kaleb Jans rode 41.14 sec with the head wind start not to his liking.

The riders then had an 8 lap scratch race which went smoothly until 3 laps to go when Dylan Adams upped the ante.  However, his big ride to the National Road titles did not help in the run to the line as Thomas McFarlane lead home Will Lumby and Oliver McLean for the placings.

After a short rest the riders were back on the track for a “tempo” race over 12 laps.  The first 5 laps had the riders swapping turns but from then on the first rider over the line grabs 2 points and the second rider 1 point each lap. There were several riders working to get points early before Thomas McFarlane attacked and skipped away to take the next 5 laps and finish on 10 points. Will Lumby secured 7 points for 2nd place whilst Oliver McLean on 3 points had 3rd place.

With a bit of juggling the riders had 2 heats for the 1 lap handicap as there was not enough pushers to have them all in the 1 race so the riders raced 2 heats to get 4 into the final.  The final saw Will Lumby (scr) storm home over the last 200 metres to take a convincing win ahead of Kaleb Jans (75) and Harrison McLean (30) in 3rd place.  Will rode the final 1 sec quicker than the heat which was equivalent to about 15m which was the margin he won by.

The A grade riders were split into 2 teams for an Olympic sprint over 1.5 laps.  The team of Thomas McFarlane, Dylan Adams and Harrison McLean put down a good first rider effort and held their lead to the finish with a time of 47.62 sec to Team B (Will, Oliver and Thomas Fitzgerald) with a time of 48.12 sec.

The last race for the night was an elimination race.  Several riders were squeezed into awkward places but managed to escape and survive to the final laps.  Oliver McLean kept an aggressive attitude throughout and this enabled him to go through to win from Thomas McFarlane and Will Lumby.

Riders should note that the Club Track Titles will be held on Feb 10, weather permitting.  Next Wednesday night the twilight Gippsland Road series gets underway at Hazelwood so riders should make sure they have a current licence to race for 2017.  Track training has shifted from Wednesday night to Monday night to accommodate this series.  The Tuesday club meeting has scheduled the road season to start on April 1.