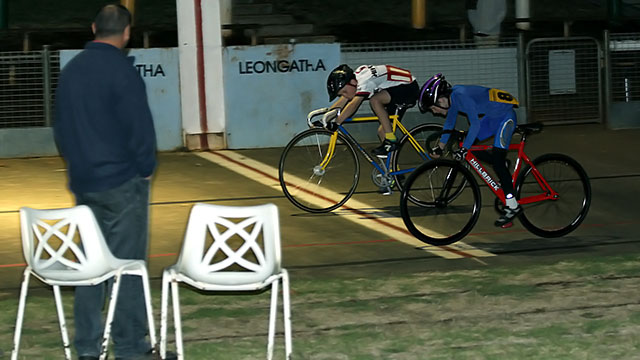 The club was lucky on Friday evening as the showers around since Wednesday cleared to allow a cool but good evening for racing.  The track was heavy so not good for best times but the racing produced some close finishes with standout performances from Bernadette Fitzgerald, Oliver McLean and Thomas McFarlane thrilling the spectators.  The Club was pleased to see Thomas in scintillating form as he heads to Sydney as part of the Victorian team on Monday for the National Titles.

Warm up scratch races were next on the agenda.  Junior B 3 lap race went to Oliver from Thomas and Jack.  In junior A, Harrison made the move before the bell and had a clear win from Bernadette and Grace whilst in the Senior race it was Thomas McFarlane winning from Ronald and Steve.

“In Junior B, the first race went to Thomas Fitzgerald from Oliver…”

Riders then had 2 rounds of handicaps.  In Junior B, the first race went to Thomas Fitzgerald from Oliver and Cody Cox with all 3 over the line together.  In the re-handicap it was Jack Allen just ahead of Cody and the fast finishing scratch rider Oliver.  In Junior A, Bernadette stormed home in a great turn of speed for the win ahead of Matt and Alex.  Next time around it was Bernadette with another win even though the handicapper pulled her back 10m.  Alex Bennett and Grace McLean filled the minor places.  In the Senior 2 lap handicap, Thomas McFarlane (scr) bridged to the other riders with some well controlled pedalling to take an impressive win.

“Second time down it was Will Lumby who kicked away just as Thomas was tacking on to the back of the bunch grabbing the win.”

Second time down it was Will Lumby who kicked away just as Thomas was tacking on to the back of the bunch grabbing the win.   Steve Allen and Thomas were the minor placegetters.

Junior B riders had an Olympic sprint and the team of Jack Allen and Thomas Fitzgerald who won narrowly from Oliver and Cody.  The Junior A riders had an elimination and this saw a win to Harrison from sister Grace and Alex Bennett in 3rd.  The seniors were treated to a series of sprint derbies.  First heat went to Thomas over Ronald while the second went to Steve of Will.  Next round saw Thomas keep winning, this time over Steve whilst Ronald took the win over Will.

In Junior B sprints it was Oliver winning over Thomas in Heat 1 whilst heat 2 saw Jack Allen win ahead of Cody.  In Junior A, Bernadette scored the win over Grace whilst Harrison in a 3 up heat had the win from Matt and Alex.

This left a round of scratch races to finish the night.  In the Junior B secret distance race it was Oliver winning from Thomas and Jack.  In the Junior A race, also a secret distance it was Harrison winning from Bernadette and Grace.  The seniors finished with an 8 lap race and even though Ronald made a break at 3 laps to go he was not able to hold out Thomas who rolled in for another win over Ronald and Steve.