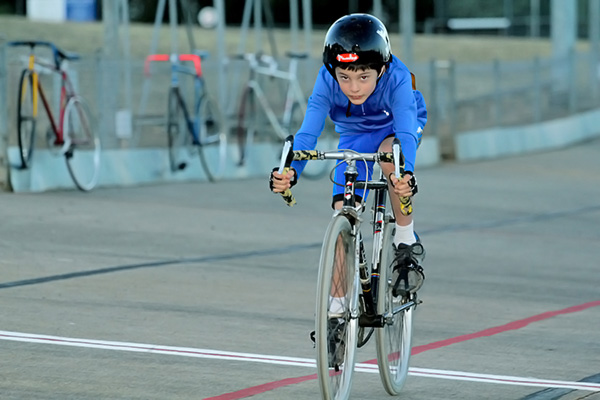 What was supposed to be a club night at Warragul failed to eventuate so it was a usual Friday night of club racing.  Thomas McFarlane was missing as he had a State team event at Northcote prior to heading to the National Track Titles in Adelaide next week.  However, after a Wednesday night training crash the numbers were down and some riders were still carrying some scars.  However, it was a warm but windy night for racing.

The first up 1 lap against the clock saw Matt Minogue continue to improve his personal best times and he is now very close to getting into the 34 sec zone following his 35.16 time.  Next best was Kevin Feely at 36.10, Austin Timmins at 37.51 sec , Alex Bennett at 42.48 sec and Thomas Fitzgerald at 49.05 sec.

“The riders were given a 1 lap handicap with Alex Bennet at 60m.”

The riders were given a 1 lap handicap with Matt Minogue on scr, Kevin Feely 10m, Austin Timmins at 20m and Alex Bennet at 60m.  Matt Minogue thought he had the race won but was pipped right at the line in a close finish by Kevin Feely whilst it was also tight for 3rd with Austin getting the nod.  Thomas Fitzgerald was missing competition after the Wednesday night bingle so he was given a flying 200m event and clocked in a 20,69 time.

The other riders recovered and were given a 2 lap handicap.  This time Kevin was on scratch and chasing out to 140m.  The results went Kevin 1st, Alex (140) 2nd and Matt (25) 3rd.  Meanwhile Thomas fronted up for another 200m flying 200m and showed that practice does help as he improved to 20.48sec.

The now recovered quartet were split into two teams – Austin and Matt versus Kevin and Alex for a 2 lap teams sprint.  The past weeks format has seen the riders doing only a half lap turn and this is what Austin did leaving Matt to do 1.5 laps of effort.  Fortunately he was up to the task and brought the team home by a narrow margin for the win. 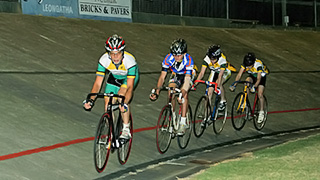 “…riders finished the night with an 8 lap scratch race.”

Thomas had a 200m time trial for his last event and recorded a good 23.99sec time showing that even after some efforts he was still going strongly.
The other riders finished the night with an 8 lap scratch race.  Again Kevin Feely claimed the win.  The minor places went to Matt and Austin.
At the Tuesday night meeting it was decided to finish the season on Friday March 8th – racing and a Pizza night.  This will allow road season to start on March 16 with crits at Bena.  We wish Thomas McFarlane all the best for his tilt at the National Titles next weekend.  He has been putting in some good efforts at the training days and looks in good form.