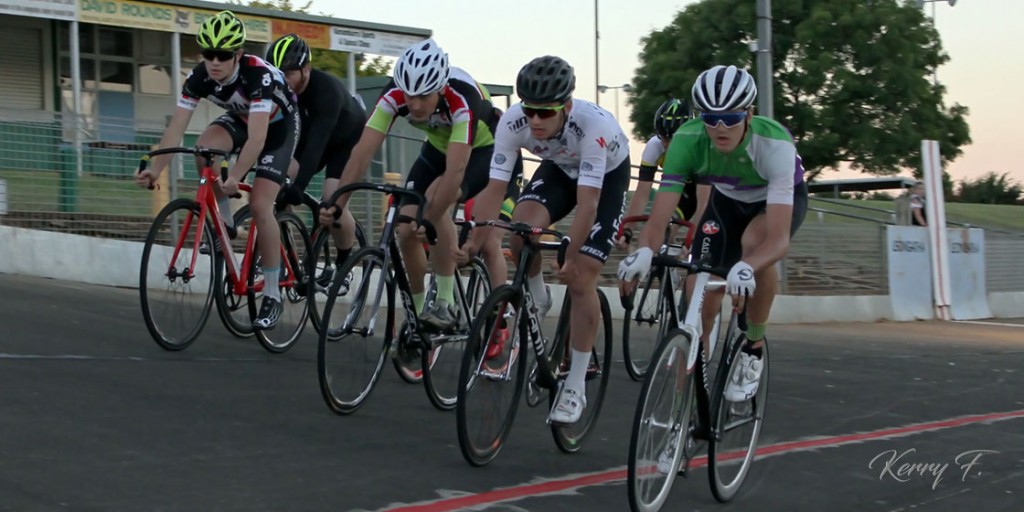 One of the more pleasant nights greeted riders for the club’s weekly track racing.  A good turn-up of seniors meant a night of fairly intense racing for them, whereas junior numbers were down, but they still enjoyed some competitive racing.

As usual the race started with the customary one lap time trials.  The juniors rode strongly recording times not far off their PBs.  Jack Allen recorded the best time of 37.45 secs, Felicity Waddell with 38.65 and Caleb Murphy 43.16.  In the senior time trial, Thomas McFarlane recorded 30.16secs and Will Lumby 30.41, both recording PBs for the season. The others may have been a bit off their best after racing the Gippsland Twilight Series at Hazelwood Pondage on Wednesday night.

Junior Scratch Race (5 Laps) – riders set off in an orderly fashion swapping turns for the first four laps.  Approaching the bell lap Felicity Waddell lifted the pace to gain a bit of distance on the other two, but Jack Allen upped his effort coming around Felicity in the home stretch to finish strongly for the win.  Felicity came through for second with Caleb Murphy third.

“A close finish saw Thomas in front by a nose from Will and Harry.”

Senior Scratch Race (8 Laps) – with a bigger field than usual the riders set off at a leisurely pace until they got themselves organised and then they lifted the pace. They swapped turns in an orderly fashion until, with three laps to go, Steve Allen took off to gain a considerable lead on the others.  Some strong chasing was required by the bunch and they responded with Thomas McFarlane and Will Lumby leading the way.  At the bell Steve still had a 40 metre lead but it was eaten up in the back straight as Thomas, Will and Harry McLean were keen for a win.  A close finish saw Thomas in front by a nose from Will and Harry.  Not far behind came Dylan Adams, Thomas Fitzgerald, Steve Allen, Kevin Feely, Chris Ray and Dane Herbert.

Junior Handicap (1 Lap) – Felicity Waddell (20m) soon rounded up Caleb Murphy (30m) but they needed to work hard if they were to hold off Jack Allen (Scr). Jack pushing hard overtook Caleb at the end of the back straight and had Felicity in his reach.  Jack Allen managed to pass Felicity on the home stretch to take the win.

Senior 2 Lap Sprints – Heat 1 saw Thomas Fitzgerald, Dane Herbert and Kevin Feely riding off. Thomas Fitzgerald took off quickly just before the bell lap to establish a handy lead.  Kevin and Dane gave chase but didn’t quite have enough fire power to bridge the gap. It was a good win to Thomas with Dane second and Kevin third.  In Heat 2 saw Harry McLean, Dylan Adams and Chris Ray fighting it out.  They started off at a pedestrian pace for the first lap with the riders keeping an eye on each other. Harry was keeping Chris up on the fence, when Dylan from behind took them both by surprise as he duck down on the inside to gain a handy lead.  Harry and Chris chased hard in pursuit and as they came to the line, it was a photo finish with Harry pipping Chris for the win with Dylan edged out for third.  Heat 3 saw a contest between Thomas McFarlane, Will Lumby and Steve Allen. With a little bit of cat and mouse to start the race, it was going to be an interesting race. The boys settled half way into the first lap, but then with 40 metres till its end Will went and quickly had a substantial lead. Steve looked at Thomas to chase and he did, leaving him in his wake. Thomas was flying but it wasn’t enough as Will took the win on the line. Steve rolled in for third.

Felicity on 30m went on to win.

Junior Handicap (take two) – A slight change to the handicaps saw Jack Allen still on scratch but Felicity Waddell out to 30 and Caleb Murphy to 50 metres. Again Felicity was quickly up to Caleb with Jack catching quickly. Felicity was not going to let this one go, holding off Jack for the win with Caleb taking third.

Senior Olympic Pursuit – Uneven numbers saw Thomas McFarlane having to do extra work for his team of Dane Herbert, Thomas Fitzgerald and Harry McLean. The other team was made up of Kevin Feely, Steve Allen, Chris Ray, Dylan Adams and Will Lumby.  Dane Herbert had the steam train fired up and led his team out well, but a strong turn by Steve Allen bought his team back into the contest.  Harry McLean pushed hard to hand Thomas McFarlane a slight advantage which he extended on the first half of his double turn, but the second half saw a fresh Will Lumby put in a great turn to bring home the win for his team.

Junior Sprint (1 Lap) – Caleb Murphy caught the other two napping to establish a handy lead, but a strong finishing Jack Allen got him on the line with Felicity Waddell coming in third.

Senior Elimination – On the last bend of the free lap Dane Herbert came around the top to try and open up an advantage but this was quickly covered by Will Lumby and then the rest of the field. They continued past Dane to see him the first out.  Poor positioning saw Steve Allen out on the next lap.  A tight finish on the next had Thomas Fitzgerald boxed in with nowhere to go and was the next out. With the tail rounding up the field on the next lap saw Kevin Feely pushed to the back and the next out.  Next out was Chris Ray with the pace lifting.  Dylan Adams put in a last effort but couldn’t hold it to be the next out.  With only three left it looked like Harry McLean might cause an upset coming around the outside of Will Lumby and Thomas McFarlane but he ran out of gas down the straight to be the next out.  On the final lap Thomas snuck on the inside of Will on the last bend and held on for the win.

Junior Sprint (2 Laps) – With Felicity retiring for the night it was a race between Jack Allen and Caleb Murphy.  Jack proved too strong for Caleb on the second lap and took the win.

Senior Scratch (12 Laps) – After a fairly intense night the riders were happy to roll around swapping turns, but with 5 laps down Thomas Fitzgerald took off to break-up the leisurely ride.  He was soon caught by the end of the lap and the riders had bunched up again.  The riders settled again until Thomas Fitzgerald rolled to the front for his turn, but once again he put in a burst.  The bunch chased led by Chris Ray and Harry McLean.  Chris continued past Thomas and then Harry to establish a fair lead but it was all too much and they came together with 3 laps to go.  With 2 laps to go Dylan Adams lifted the pace but was covered by Will Lumby who kept going with Thomas McFarlane not far behind.  In the end Thomas McFarlane was too strong riding over the top of Will for the win with Steve Allen rolling in for third and Thomas Fitzgerald fourth.

Many thanks to the Love’s for their donation of the raffle; won by Kevin Feely. A reminder that the club track titles will be held on Friday 10th Feb.