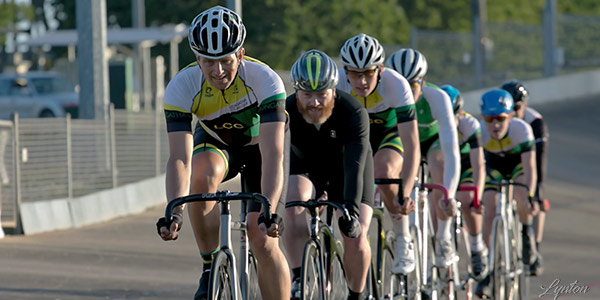 Friday night club racing produced a normal cool to cold night at the Velodrome with an early southerly wind dropping off by around 7.30pm so that riders were able to post some personal bests for the 1 lap time trial. Will Lumby was quickest with a new PB at 30.62 sec. Next in was Austin Timmins at 31.35 sec but Austin was trying to punch out an 800m time as well. Visiting rider Chris Ray was next best at 31.63 sec. Oliver McLean pushed a new PB at 35.06 sec whilst Thomas Fitzgerald crashed his PB time down to 34.87 sec which was almost 1 sec improvement. In the B grade group, Jack Allen took over 2.5 sec of his time with anew PB at 37.94sec. Next in was Felicity Waddell at 38.96sec just ahead of Kaleb Jans at 39.08sec whilst Caleb Murphy was also in by 1.5 sec for a new PB at 41.59 sec.

Jack Allen leading at 160m to go, went on to win the B grade scratch race.

In the B grade 5 lap scratch race Jack Allen continued to fire winning clearly from Kaleb Jans and Felicity Waddell. In the A grade 8 lap scratch race Steve Allen kept the family name in lights as he flew out from the bunch before bell lap catching the quicker riders napping and held on for the lap for a great win. Will Lumby was 2nd and Austin Timmins 3rd.

The B grade riders had a 1 lap handicap and as she did last week Felicity (20) was quick away from the start and raced home for the win ahead of Kaleb Jans (10) and Jack Allen (scr) in 3rd. The handicapper re-jigged the marks and second time around it was Jack Allen (15) winning from Kaleb Jans (Scr) and Felicity (scr) just finishing ahead of Caleb Murphy.

Due to a lack of pushers the seniors were not able to have a handicap but instead had a new race – a tempo race – over 12 laps. In this race the first 5 laps were as in a normal scratch race but there after each time over the line the first rider grabbed 2 points and the second rider over the line took 1 point. As soon as the points were on offer, Austin Timmins blasted away from the bunch and quickly accumulated points. Thomas Fitzgerald chased hard and grabbed 1 point just before Will Lumby went past chasing Austin. Will eventually hit the front and scored some 2 point places but Austin found his range again and took the last 2 laps to win with 12 points to Will on 8 and Thomas on 1 point.

The A graders had a round of sprint heats and heat 1 went to Oliver McLean from Thomas Fitzgerald and Rob Waddell. In heat 2 Chris Ray had too much speed for Steve Allen and in the third heat Will Lumby had the best track craft in his race with Austin and duly won.

The B graders raced a progressive points score race. This race each time they cross the line the lead rider takes the points which increase each time over the line – 1 then 2 then 3 etc. Kaleb Jans was quickly away and opened up a handy break. However, Jack Allen chased hard and eventually managed to take the last 2 laps and the win with 11 points to Kaleb’s 10 points. Felicity was 3rd over the line.

The A grade riders had another endurance event with an elimination. This produced some close racing and riders being caught out taking the wrong tactics. At the end it was Austin Timmins taking the win from Will Lumby and Oliver McLean.

Felicity had a narrow win over Kaleb in this print heat.

The B graders finished the night with sprint heats. Jack Allen had a win over Caleb Murphy whilst Felicity had a narrow win over Kaleb Jans. The A graders finished the night with another 8 lap scratch race. This race was an interesting race with Thomas Fitzgerald breaking away at the start and leading for 4 laps before it all came back to a bunch finish. Once again the superior speed of Will Lumby saw him grab the win from Austin and a close third to Chris Ray.

It is great to see riders improving and setting new personal best times but also learning how to race and make the most of their opportunities. The next few weeks some riders have Xmas activities whilst Austin is racing at the Oceania Games in Melbourne so it will be a different field. The Club is hoping to see some of the 20 odd riders training of a Wednesday night grab some racing as well.