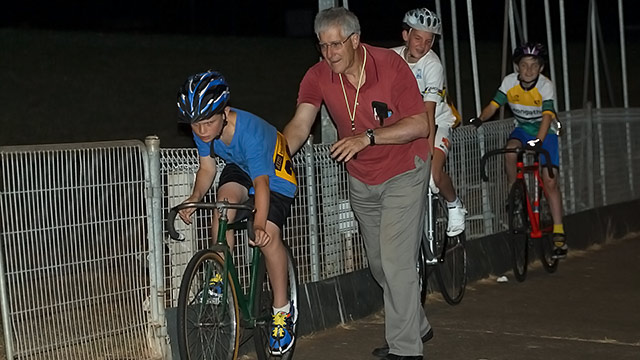 Friday night racing for the 2014/2015 season started on Friday night.  Following the past 2 Wednesday nights of training with over 20 cyclists in action, this Friday night the club had to contend with holidays and riders saving for racing on Saturday and Sunday at the indoor velodrome at Northcote.  Consequently there were only small fields in action. The club welcomed new riders Dylan Adams and Kaleb Jans and both went really well.

Our normal program of a 1 lap time trial to start the night saw some close times recorded but most riders were still not moving well so there is plenty of room for improvement over the season.  In the Junior section, Kaleb Jans put in a good first time at 48.04 sec.  Fleur Timmins recorded 41.60 sec and Thomas Fitzgerald just a fraction quicker at 41.35 sec.  Into the senior field Will Lumby was the best at 32.13sec.  He was followed by Harrison Mclean 34.52, Dylan Adams 34.62, Bernadette Fitzgerald 36.52 and Kevin Feely at 36.71 sec.

The handicapper used those times to set marks for a 1 lap dash. Fleur Timmins (5m) held onto her lead over Thomas Fitzgerald (scr) all the way to the line rounding up Kaleb Jans (70) in the process.  In the senior race we were missing some quality pushers for the start so this allowed Will Lumby (Scr) to quickly round up the field and score an easy win from Kevin feely (50) and Bernadette Fitzgerald (40).

With one race as a sighter the handicap tried a second time to weave some magic.  In the junior 1 lap dash, Kaleb Jans (110m) opened his account with a great win ahead of Thomas (10) and Fleur (Scr).  In the senior division over 2 laps, Kevin Feely (100) defied the chasers to lead all the way and win from Dylan Adams(50) and Will Lumby (Scr).As it was the first night and riders were finding the intense efforts pretty demanding, the next round of races were sprint matches.  In the junior division, Fleur grabbed the win from Thomas and Kaleb.  In the senior section, the first heat saw Dylan Adams take the win from Kevin and Bernadette.  In the second sprint it was Will taking the win over Harrison.

The juniors fronted for a second sprint heat and this time it was Thomas winning from Fleur and Kaleb. After a short rest they were back on the track for the last race – a 3 lap scratch race with a difference.  The starter gave Kaleb a start of around 120m and he held this lead until 20m from the line when Thomas and Fleur shot past to take the major podium places.

In the senior 8 lap scratch race, the riders swapped turns until around 3 laps to go when Will Lumby shot round the bunch and lifted the pace.  After a lap the field was back together and jostling for the lead-out in the sprint. At the line it was an easy win to Will from Kevin and Dylan.

Training will be on again on Wednesday night.  Any one keen to give it a try is welcome to come along and have club coach Tony Smith introduce them to track cycling.  Perhaps they can be like Kaleb and Dylan and move on to a successful first night of racing.