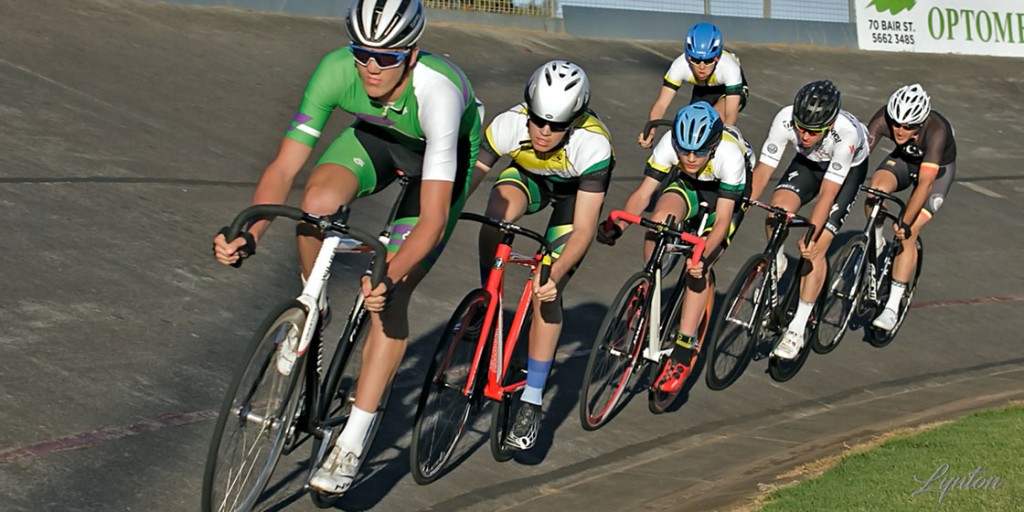 The time trial was followed by a 4 lap scratch race for the juniors which saw Kaleb Jans take the win from Caleb Murphy and Isabella whilst in the seniors the pace was kept at a good tempo throughout the 10 laps.  In the dash to the line it was Thomas McFarlane winning from Will Lumby and Oliver McLean.

The juniors had a 1 lap handicap and Caleb Murphy on 40m took out the race from Kaleb Jans (scr) and Isabella (55m) 3rd.  In the re-handicap, Kaleb Jans was quickly away and closed down the handicaps by the time he turned into the finish straight to win from Caleb (30) and Isabella (60).

The seniors were split into 4 x 2 rider teams and raced in shirts to coincide.  The race was over 8 laps with a sprint every 2nd lap, each carrying points.  However, the last sprint would be based upon the position in the finish of the second rider in each team.  With riders trying to do their mental arithmetic whilst racing the end result was very close.  The team of Oliver and Dylan won with 11 points from Harrison and Tom Fitzgerald on 10 points whilst the team of Thomas McFarlane and Kaleb Jans were equal with Will Lumby and Dane Herbert on 9 points.

The seniors then raced an elimination which was keenly contested at each lap to avoid being the last rider over the line and hence eliminated.  The final result was a win to Will Lumby over Thomas McFarlane and Harrison McLean.

Kaleb Jans and Caleb Murphy raced a 1 lap sprint and after blasting away at the start Kaleb Jans looked to have it easily secured but Caleb Murphy eventually had the gear wound up and challenged down to the line but just missed out.  The seniors finished off with some sprint heats as well.  Tom Fitzgerald just pipped Dane Herbert in his heat whilst Dylan Adams managed to out fox the McLean brothers to win his heat narrowly.  In the final heat it was a classy win to Thomas McFarlane over Will Lumby.

Next Friday night the club is scheduled to run the track championships so we look forward to all riders being on deck.  However the Monday night training may be interrupted by a rainy night. Riders may have to use the Wednesday night twilight Gippsland Road event at Dumbalk as the weeks training.  Along with Sunday morning races at Warragul most riders have a hectic schedule just at present.