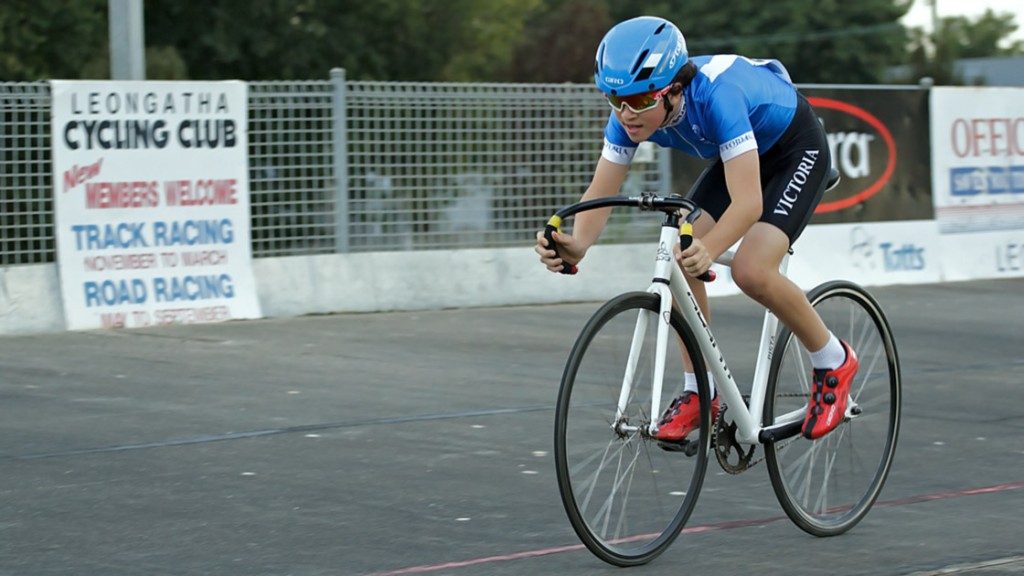 The 2016 summer track season came to a close with the running of the senior track title on Friday night. Following a very hot afternoon, the track had a small sprinkle of rain from a passing thunderstorm at around 6.15pm and conditions come race start were still very warm and a touch humid. The club was also able to welcome Austin Timmins back from his National Title efforts in Tasmania of the previous week where he was part of the silver medal winning Men 17 team pursuit.

As usual the first ride of the night was a time trial. The junior riders were over 1 lap and Kaleb Jans and Caleb Murphy both put in a new personal best. Best time for the night went to Oliver McLean at 35.00 sec, followed by Kaleb Jans 38.41sec and Josh Wight at 39.38sec. The seniors time trial was over 500m which put the start In the north bend and this appeared to impact on the times for some riders. This event formed part of the 3 event championships. Best was Austin Timmins at 37.89 sec from Dylan Adams 41.17 sec and a top effort from Graham Jans at 41.49sec.

The juniors followed up with a 4 lap scratch race. Oliver Mclean raced well to stay ahead of Kaleb Jans whilst Josh Wight was too quick for Caleb Murphy. The seniors moved into some sprint heats. The heat winners were Austin and Dylan and they went through to ride for the gold and silver placings whilst the losers rode for the bronze. Austin made is 2 from 2 events ahead of Dylan whilst Graham Jans showed the others some clean air as he secured the bronze.

The juniors then raced a 1 lap handicap. Kaleb Jans (25m) flashed home a clear winner from Josh Wight (40) with Oliver Mclean (scr) just sneaking in for 3rd. After a short rest and handicap adjustments they were again on the track for another handicap. This time Caleb Murphy (80) had a break through win by a very narrow margin from Oliver (scr) and Kaleb Jans (15).

The seniors raced a 10 lap scratch race for the final event of the championships. Again it was Austin in full control to secure the win and overall title. Second went to Dylan whilst Graham Jans secured 3rd. That was also the same order for the overall championship points.

The juniors last race was a 5 lap scratch race and once again Oliver was first to salute the judges with Kaleb and Josh in the minor places.

The Club has a few weeks break before starting with road season on April 9 with racing at Outtrim reserve. However, on Tuesday night March 15, the club has a Special General meeting scheduled to vote on a name change. All members are urged to attend and vote on the issue.