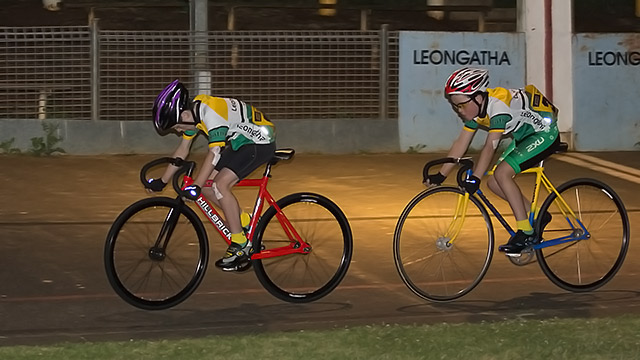 Thomas and Oliver in action on Friday night. (23 event images)

Friday night threatened to be showery but stayed fine for the running of cycling.  Again the Great Vic Bike ride and Xmas functions reduced our competitor numbers and for some that were in attendance they were tired from activities earlier in the day or were gearing up for a big Saturday ride.  Consequently the racing lacked the energy of the previous week.
In the opening 1 lap time trial quickest on the night was Will Lumby at 31.92sec.  Next best was Harrison McLean 33.35sec followed by Dylan Adams 34.05, Michael Park 34.50, Bernadette Fitzgerald 35.72 and a tired Grace McLean at 37.27 sec.  In the Junior group, Oliver McLean clocked 40.52sec. Thomas Fitzgerald followed at 41.17 which was a new personal best.  Felicity Waddell put in a good ride to stop the clock at 43.11sec. Next it was Kaleb Jans 44.74 and Josh Wight 47.57 who were both getting accustomed to new bikes.

“Will Lumby was able to sprint clear for the win ahead of Harrison and Michael Park.”

The opening scratch races saw the seniors race over 6 laps.  Will Lumby was able to sprint clear for the win ahead of Harrison and Michael Park.  In the junior race over 4 laps, Oliver McLean took the honours from Felicity and Thomas.
For the handicaps, the seniors started with a 1 lap dash.  Will Lumby (Scr) flashed home and grabbed the win right on the line from Michael Park (15) and Bernadette Fitzgerald (40) in an exciting finish with the field right across the track.  In the second handicap over 2 laps, Harrison McLean (40) had a narrow win from the fast finishing Will Lumby (scr) and Dylan Adams (50)

“In the junior handicaps, both over 1 lap, Kaleb Jans (25) got the new bike up to speed to take out the first race from Josh Wight (35) and Oliver McLean (scr).”

In the junior handicaps, both over 1 lap, Kaleb Jans (25) got the new bike up to speed to take out the first race from Josh Wight (35) and Oliver McLean (scr).  The second handicap saw Thomas Fitzgerald (15) ride strongly to take the win in a photo finish from Oliver McLean (scr) and Felicity Waddell (35) third.

The Junior riders had 2 sprint heats.  In the first Kaleb Jans took the win from Josh Wight whilst in the second heat it was Oliver winning from Thomas and Felicity. By this stage of the night, the senior field was back to 3 riders so their sprint heat saw Will Lumby win from Michael and Bernadette.

The last ride for the night was an elimination race for the juniors.  In a good race Oliver took the win from Thomas and an improving Kaleb. Club officials will have some more work on Wednesday night to set the gearing for Kaleb and Josh which should help them match the competition.

With only 2 weeks left until the Xmas break officials are hoping to see some good fields so that some trophy races can be conducted.  The officials are also hoping to get several new riders progressing from training to racing.