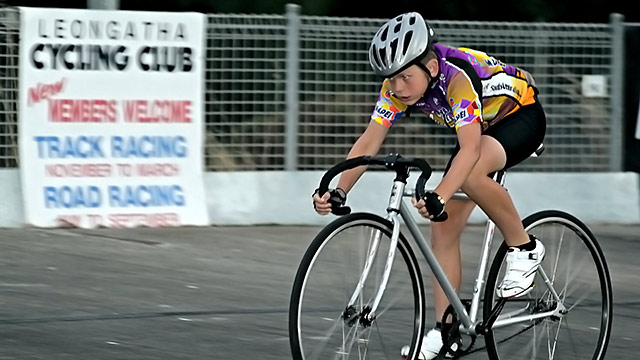 Track season ended on a good note on Friday night with the day’s earlier rain clearing in time to run racing in cool conditions but a heavy track. This impacted on times for the 1 lap dash against the clock with only Felicity Waddell posting a new personal best. Both Thomas McFarlane and Austin Timmins went close to putting in new PB’s and followed the past few weekends racing at the indoor track in Melbourne where they had both performed really well.

For the 1 lap time trial in the juniors Oliver McLean clocked 39.11, followed by Thomas Fitzgerald 40.59 and Kaleb Jans 42.07sec. However, there were some tired riders as they had been on school camp at Wilsons Prom during the week.

In the girls it was Bernadette Fitzgerald in 34.52 from Katherine Fitzgerald 37.66 sec and Felicity Waddell in 41.81 sec. In the senior ranks it was Thomas McFarlane in a slick 30.01 ahead of Austin Timmins 31.20sec. Harrison McLean was next best in 33.07 sec.

The senior 8 lap (3.2km) scratch race was a pacey affair with Thomas and Austin coming from 40km points races last weekend being pushed by Harrison who is busy putting time in on the road bike. The sprint saw Thomas take the win from Austin and Harrison. In the girls race over 5 laps it was Bernadette taking the win from Fleur Timmins and Felicity Waddell. The junior scratch race over 4 laps saw Thomas Fitzgerald lead out the field with a strong move at the bell. However Oliver McLean made his move with 200m to go to take a convincing win. Thomas held on for second whilst Michael Eastwood sprinted home well for third.

The handicap races saw the seniors race over 2 laps. Thomas McFarlane (scr) bridged the gap with 250m to go just as the field came together and moved to the front and looked to be heading to an easy win. However, a late surge from Austin (25) saw the judges looking at the photos to confirm the win for Thomas. Dylan Adams (75) finished well to grab third. 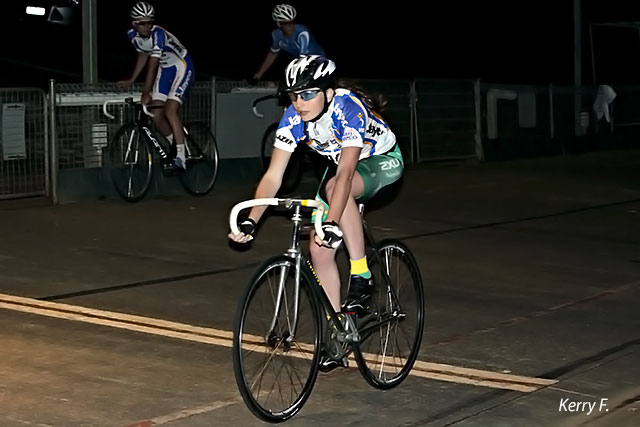 “In the girls 1 lap handicap, Katherine Fitzgerald (45) found her legs and blitzed the field for the win. “

In the girls 1 lap handicap, Katherine Fitzgerald (45) found her legs and blitzed the field for the win. Felicity (55) continued her good form to take second whilst Bernadette (scr) finished well to take third. In the junior race over 1 lap Josh Wight (30) also thought the handicap was about right and fought hard right to the line to have a narrow win. Kaleb Jans (15) flashed home for second just holding out Oliver McLean (scr).

The riders then finished the season with a round of sprint heats prior to joining in at the sausage sizzle. In the first heat it was another tight battle but Thomas had a narrow win over Austin. In the second heat Harrison accounted for Dylan. In the girls it was Bernadette over Katherine whilst in the second heat the girls left the move until after the 200m to go and Fleur managed to out jump Felicity. In the first of the junior races Oliver again had the upper hand over Thomas . In the second heat it was a narrow win to Michael over Kaleb whilst the last race of the season saw Jack Allen take the win over Josh.

Next Saturday, road season will start with racing from the Pound Creek tennis courts. Assembly at 1.00pm and entries need to be in by 1.30pm. The seniors and juniors are all starting to put time in on the road bikes whilst the weather has been good. The club has just 2 Saturdays before the Inverloch Bendigo Bank Junior Experience weekend on March 28 and 29. This is a great chance for our new juniors to meet and mix it with riders from around Victoria.