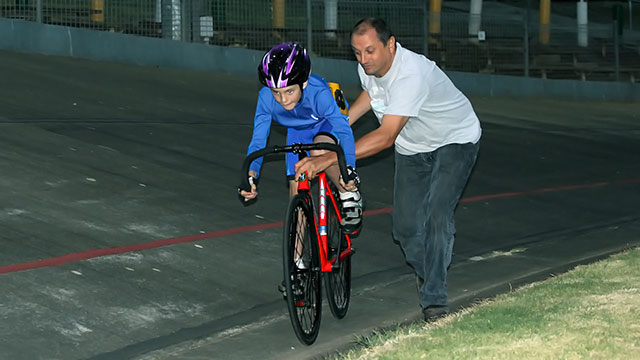 Friday night was a near perfect night for racing at the Leongatha Velodrome and the riders produced some great racing. The Club was pleased to have Thomas McFarlane back after racing the State Titles the previous weekend. With a podium finish in most of his events he has gained selection in the State team for the Nationals in Sydney at the end of February.

The first event for the night was a 1 lap individual time trial against the clock. In the Junior B grade event, Thomas Fitzgerald, racing on a new bike was able to peel another 1.5sec of his personal best to record a 42.58 sec lap. Next was Fleur Timmins at 44.52, then Oliver McLean 46.49 and Cody Cox on the 24 inch bike at 51.8 sec. In the Junior A section it was Austin Timmins at 33.95 almost equalling his previous best time. Next in was Matt Minogue 35.67 just ahead of Harrison McLean and Aaron Fraser both at 35.98sec. Bernadette Fitzgerald was also showing improvement at 36.64 whilst Alex Bennett clocked in at 39.95 and Matt Winchester at 41.35 sec. In the senior section, Thomas McFalane turned in a slick 30.03 sec after coach Tony Smith had pushed him through several prior efforts. He was flowed by Ronald Purtle 31.22, Will Lumby 33.7 and Kevin Feely at 35.42 sec.

“The Junior B 3 lap was won by Oliver from a very competitive Thomas Fitzgerald and Fleur.”

The next round of racing was short scratch races for each group.  The Junior B 3 lap was won by Oliver from a very competitive Thomas Fitzgerald and Fleur.  In the Junior A section a touch on wheels at 300m to go took out 2 riders.  The winner of the 5 lap race was Austin Timmins from Harrison McLean and Matt Winchester.  In the senior 8 lap scratch race it was a win to Thom McFarlane from Ronald and Will.

The handicaps were next on the agenda.  In the Junior B racing it was a win to Thomas Fitzgerald from 25 m ahead of Cody Cox (50) and Oliver (Scr). Second time round for the 1 lap event it was a win to Oliver (Scr) from Thomas (10) and Fleur (15).  In Junior A, the first race went to Matt Winchester (60) from Austin (scr) and Bernadette (30).  In the re-handicap it was a tearaway win to Harrison (20) from Alex (55) and Austin (Scr).  For the seniors the handicap was over 2 laps and first time the race was won by Thomas McFarlane (scr) from Will (75) and Kevin (85).  For the second time, Thomas was on a reduced gear per coaches order and quickly found he was pedaled out of the race.  This time the win went to Ronald (45) from Will (65) and Kevin (100).

The Junior B riders moved to some sprint derbies.  The first race was won by Oliver over Thomas whilst in the second Fleur had the win over Cody. The other groups had Olympic sprint races. In Junior B the win went to Harrison, Alex and Matt Minogue.  In the senior Olympic sprint it was a win to Ronald and Will. A second 1 lap dash for the junior B riders saw Thomas grab the win from Oliver and Fleur.

Next week racing will see the riders competing in the Club titles.  This should see plenty of interest in the Wednesday night training.

Riders were in action at Newborough on Sunday in very hot and windy conditions. Riders were down from Ballarat and the City so it was competitive and a learning experience for some of the club members who took part.  Austin Timmins picked up several placings including Under 15 handicap.  Ben Meadley took out the A grade scratch race whilst Will Lumby grabbed the Senior B grade kerin event.  However, club Secretary, also in this final managed to have a close encounter with the asphalt just after the finish line so ended the day on a bad note.  It was not a good weekend for riders one week out from the Club titles.

The road season fixture should be sorted at the next Club meeting on Tues 18 at the Love residence.  If you have any thoughts for road season get the info into Club president Ronald.  With several new juniors likely to try road season we are looking at some Bena criteriums in late March to get things underway.