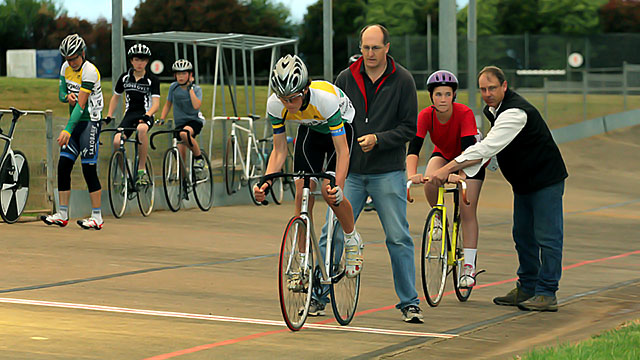 Friday night was the second night of track season and the rainy weather cleared for enough time to run the racing.  However, the members at Wonthaggi were obviously dissuaded by the rain going over that area.  The Club had 15 riders including 3 racing for the first time.  Now is a great time for any novices to come along to Wednesday night training to try out.  This way they can join in with a number of other novice riders – boys and girls.  The Club will put new riders onto club track bikes – just come with a helmet.  Wednesday night training saw around 25 riders going through their paces under the tutelage of club Coach, Tony Smith.

The next round of races were short scratch races.  Junior B grade went Fleur, Jack and Thomas.  The Junior A grade saw Matt Minogue win from Austin and Grace with a great first race.  In the seniors the pace was on and Thomas McFarlane had to work hard to get the result from Steve and Josh.

This was followed by a round of handicap races, all over 1 lap.  In junior b grade it was Thomas Fitzgerald having a great night who claimed the win just ahead of Jack Allen whilst Fleur just nudged past Cody on the line.  The Junior A grade saw Harrison McLean get past Matt Winchester for the win whilst the scratch rider flew home for 3rd.  In the senior event it was Josh Chiavaroli who flew away at the start who claimed the win from Chris Rowe and Kevin Feely.

After some work from Handicapper Steve Wilson the riders were back up for a re-handicap.  The B grade juniors saw the same results as first time round.  However, in junior A grade it was Austin Timmins who made the most of the handicapper’s generosity winning from Alex Bennett and Matt Minogue.  The senior race was over 2 laps and had a bit of excitement as Kevin Feely punctured the rear wheel and managed to come from the bank without falling.  Chris Rowe took the win from Steve Allen and Thomas McFarlane.

The Junior B was given a 3 lap scratch race and again it was Fleur taking the win from Jack and Thomas.  Jack decided that after several seconds he had some work to do to convert those to wins.  The Junior A grade raced an Olympic Team sprint over 1.5 laps and the team of Matt Minogue, Harrison McLean and Alex Bennett scored a narrow win from Austin, Grace and Matt Winchester.  The seniors were given some sprint match races.  The first saw Josh challenge hard against Thomas McFarlane but just fall short.  In the other heat it was Steve Allen who rode a well controlled race gain the win from Chris Rowe.

Fleur, Jack and Thomas rode a 2 lap race without Cody but it was a repeat of earlier results.  For a last ride Fleur decided a girls sprint race was in order and duly challenged Grace, Grace took the lead and controlled it all the way for a win leaving Fleur to revisit her tactics for another week.  The junior A grade raced some sprint heats as well.  Matt Minogue took the win over Austin, Harrison a win over Alex and Grace a win over Matt Winchester.

“Fleur decided a girls sprint race was in order and duly challenged Grace.”

The senior last up scratch race over 8 laps saw Kevin a no starter – no spare wheel – and Josh reach the end of his fitness.  This left Thomas winning from Steve and Chris.  The Junior A riders finished up with a 5 lap scratch race.  Following on last weeks efforts Austin Timmins showed that fitness counts as he again grabbed the win in the last scratch race from Matt Minogue whilst Harrison McLean finished off a good night with third

Lynton Clay was busy all night taking photos.  These can be seen on the club website – www. leongathacycling.com.  Members are reminded they have an annual general meeting in a week and a half.  Members need to vote on a new constitution and elect some new officials.  Long serving official Phil Ewington is retiring and the Club needs some members to step up to help run the club.