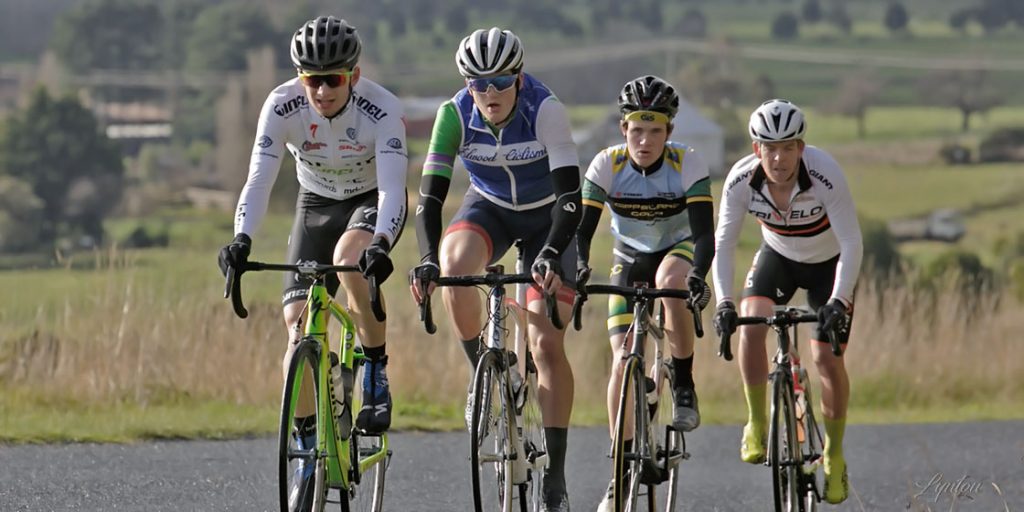 Club racing started beside the Woolamai Race track on Saturday and used what members know as the Glen Forbes gorge circuit.  The course offers a variety with racing along the flats around Bass and Glen Forbes out to the Bass Highway before returning for the 4km climb up the Glen Forbes Rd and then back over Mill and Trews Rd to Woolamai.  Showers came through just before the start but the actual race escaped without further showers.

The A grade field was just 10 riders with a 4 rider scratch bunch chasing 2 on 6minutes, 2 on 12 minutes and a further 2 riders on 15 minutes. By the time riders reached the turn at the Bass Highway (Corinella Rd corner) the limit riders – Tony Giles and Morgan Barnes had given up just 30 seconds to a hard working duo of Damien King and Brad Bouquet.  The 6minute duo of Leigh Stott and David Supple had also picked up 30 sec but the scratch bunch had not made up the expected time.  Up the gorge, Damien King showed he was the fittest as he dropped his co-marker and rode through to hit the lead.  By the time the riders reached the Mill Rd corner and the several climbs to the range top, Damien was sporting a 30sec lead to Morgan Barnes with still sizable gaps back to Brad and Tony and David and Leigh. Scratch were in trouble as Will Lumby was forced out with a puncture and Brett Franklin was not his usual driving force.  With the downhill run at the racecourse it was a clear win to Damien.  Next in was Morgan Barnes then Leigh Stott, Brad Bouquet, David Supple, Thomas McFarlane 6th and Fastest Time – 66 min 19 sec. 7th went to Harrison McLean, 8th Brett Franklin and 9th Tony Giles.

“…by the time the riders had returned to Glen Forbes he had made the catch.”

In the B grade race over 22km Caleb Murphy reached the half way point still in front, but Kaleb Jans was charging hard and by the time the riders had returned to Glen Forbes he had made the catch. The two riders swapped turns on the return across the Bass flats and Kaleb Jans opened up a gap in the run up Trews Rd to the finish line to take first and fastest.

Next Saturday the club will conduct the State Individual time trial titles at Kernot racing out and back on the Loch-Kernot Rd over the afternoon.  The club is expecting around 75 + entries so there will be a constant run of cyclists on the road for the afternoon.  Tuesday night there is a club meeting at the RSL and final details will be sorted.  Our junior elite riders were racing the Bendigo tour over the weekend.  Felicity Waddell, Thomas Fitzgerald and Oliver McLean were racing and there were around 120 entrants for the weekend including riders from South and West Australia.