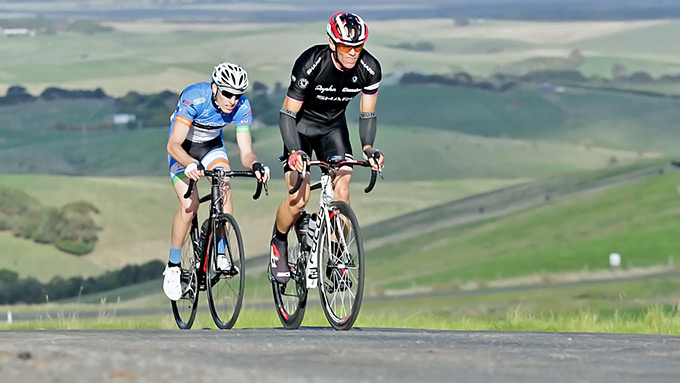 Riders had a fine but windy afternoon for tackling the hilly circuit starting and finishing at the Woolamai Race track in Trews Rd, Woolamai. The senior race includes a run out and back from Glen Forbes to the highway putting the race out to around 38km. The course includes the 4km climb up Glen Forbes gorge and the 3 stiff climbs back up Mill Rd.

Whilst some riders were away at the Junior tour at Ararat, the field of 14 included a 4 rider scratch bunch boasting serious form – Stuart Smith had joined forces with Ronald Purtle, Peter Hollins and Brett Franklin. They were chasing 5 riders on 5 minutes and a further 5 riders on limit of 12 minutes. By the time the riders were back to the base of the gorge climb it was obvious the scratch bunch were going to be difficult to hold off – they had wiped out over 2min to the 5 min bunch and around 5 min to the limit bunch in the first 17km of flat going.

The charge up the gorge saw Stuart Smith and Brett Franklin leave the fellow scratch riders and fly up the climb catching all but 2 of the field by the top of the climb.

From there back to the finish it was an easy catch of the limit riders. Stuart Smith jumped away from Brett up the climb on Mill Rd to race home a clear winner and fastest time in 63.11min. A short time after Brett crossed the line Ronald Purtle sprinted in ahead of Peter for 3rd. Kerry Pritchard sprinted in for 5th ahead of Brad Bouquet. Next home was Chris Rowe in 7th, Neil White 8th, Phil Hanley 9th and Jason Scott rounded out the top 10. Phil Hanley the indefatigable Masters tri-athlete obviously had not done enough on the bike as he quickly put the runners on and went for a run for half an hour.

“The climb over the little rise at Glen Forbes…”

In the Junior race we had 4 starters and they were run over the senior circuit in an out and back race of around 24km. Limit rider Matt Winchester started with the senior riders and this obviously spurred him along as he made good progress out to the turn. However the scratch duo of Austin Timmins and Matt Minogue who started 7min behind also had the senior 7min bunch to inspire their efforts. The climb over the little rise at Glen Forbes on the outward journey saw Matt have trouble holding the wheel of Austin. With out and back course Austin was able to sight Matt Winchester and Alex Bennett just in front at the turn so he was able to power along and make the catch before riding home alone a clear winner and fastest time in 45.22min. Next in was Matt Minogue, followed by Matt Winchester in 3rd ahead of Alex Bennett.