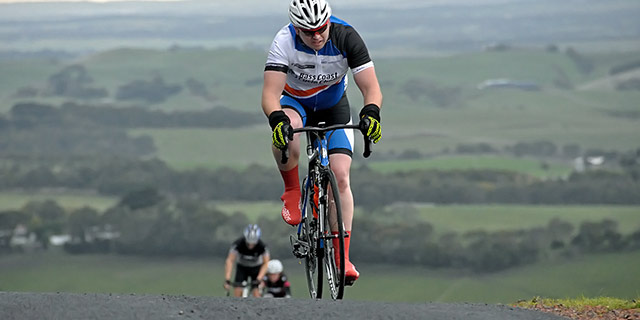 Club racing was held at Woolamai on Saturday in overcast conditions and without the chilling wind of the past weeks. The course over 38Kilometres is interesting and includes two climbs in the Bass hills. Starting at the Woolamai horse racing course, riders head out through Glen Forbes to a turn-around short of the Bass highway at Corinella, back through Glen Forbes and up the “gorge” heading towards Dalyston, before making the turn up the challenging five kilometres to the top of Mill road, then plunging down to the finish back at the racecourse. The juniors rode the same course over 23 Km’s, but only an out-and-back to the Bass highway. Both senior and junior were handicap events.

Over the weekend the senior numbers were reduced by several members competing at the Victorian Masters ITT & Road race championships at Lang Lang and Catani. The senior event with only 12 competing had two riders on the 17 minute limit mark, followed by three on 14min, four on eight minutes, one on seven minutes and two starting from scratch.

The 14min trio of Morgan Barnes, Michael Park and Grace McLean made full use of their handicap on the flatter first part of the course. Kevin Feely (7min) caught the 8 min bunch of Bernadette, Kerry and Tony at the top of the gorge. Leigh had broken away from this group and was chasing the 14 min bunch. On the testing climb up Mill road, Kevin and Bernadette had the better of Kerry and Tony with Kevin forging ahead to chase down the front markers over last climbs to the top. Over the top of Mill road and before the fast downhill to the finish, Michael Park had a comfortable 40sec. advantage on Morgan Barnes and another 20secs back to Leigh Stott (8min). Grace McLean with a lack of race fitness was doing well to be next across the top, with the rest of the field closely following. Although the scratch duo of Will Lumby and Harrison McLean worked hard, they were unable to make significant gains on the field.

The win went to Michael Park winning in a time of 1hr 15m 36s from Morgan Barnes who had made up a lot of time on the downhill, third was Leigh Stott, fourth Grace McLean, fifth Dane Herbert, sixth Kevin Feely, seventh Kerry Pritchard, eighth Bernadette Fitzgerald, ninth Will Lumby with fastest time 1hr 5m 49s and in tenth place Tony Giles.

Alfred leading Oliver, Felicity and Max on the way back…

The junior handicap event was an out-and-back over a relatively flat 23kilometre course with only a small rise at Glen Forbes to contend. This week the nine juniors participating were, Max Slinger riding from the 13minute limit. Sullivan Herbert (9.5min), Felicity Waddell, Alfred and Harry Herbert on 7.5minutes, Kaleb Jans (4.5min), Thomas Fitzgerald and Mitchell Harry on (1.5min) and Oliver McLean on scratch. After riding to turn around point and on the way back over the rise out of Glen Forbes , it was Kaleb leading the way from Thomas, Alfred, Oliver, Felicity, and Max. Mitchell Harry wasn’t having a good day. He kept ‘dropping’ his chain and briefly took a wrong turn in Glen Forbes, putting him out contention. Kaleb kept his lead all the way to the finish, winning in a time of 45mins 18secs, ahead of Thomas Fitzgerald with fastest time (43min13s), third was Oliver, Felicity fourth, Alfred fifth, Max sixth, Harry seventh, Mitchell eight and Sullivan ninth. 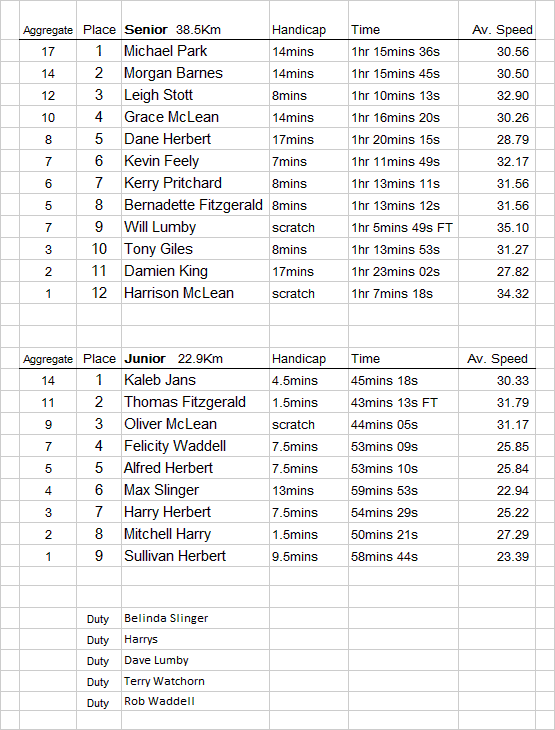