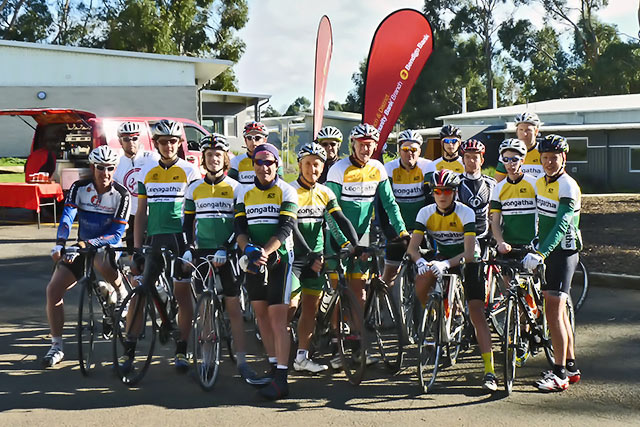 Club members took part in the 3 day Tour of Gippsland for Gippsland clubs which saw racing at Briagolong, Leongatha and Yinnar over the 3 days.
images
results

Club members took part in the 3 day Tour of Gippsland for Gippsland clubs which saw racing at Briagolong, Leongatha and Yinnar over the 3 days. Save for a little drizzle on the Saturday the riders were favoured with reasonable weather. The riders were split into 4 grades for the racing and Leongatha had riders in all grades. Our best results came from the C grade group. It was also the 50th running of the tour. The sport is fortunate to have the likes of Jim Geary still officiating after being there for the first race in 1964. It is also interesting to see that Jeff Thompson from the Warragul club was competing in his 40th tour.

On Saturday both Phil Hanley and Kevin Feely managed to win C grade stages whilst on Sunday it was Neil White who won the C grade stage. However, the club juniors were competitive in the KOM with both Austin Timmins and Harrison McLean keeping Phil Hanley under pressure to keep the lead in that competition. For both Austin and Harrison it was a great learning experience of how stage races operate.

In B grade division, last years winner of C grade – Will Lumby – was finding the going a bit tougher. However after Saturday he had a handy lead in the KOM competition. It was a similar problem for top junior Tom McFarlane in the A grade race where the top Warragul riders were setting a task for him. However Tom managed to grab a third in the Leongatha Stage on Sunday.

In the D grade section, Kerry Pritchard was competitive on Saturday with several stage placings. However, the hilly course around Nerrena and Mardan on Sunday was much to his liking as he scored an easy win and also took the lead in the king of the mountains competition. It was all set up for a super competitive Monday to resolve the overall winners in each grade.

Monday racing saw some team tactics in the C grade race as the Leongatha riders tried to get Phil Hanley an extra 2 points to take the lead however their efforts were to no avail and Phil was left to settle for 2nd overall whilst Kevin Feely took out 3rd overall. Austin Timmins in his first tour secured the King of the Mountains (KOM) competition.

In D grade Kerry was unable to back up his Sunday ride and finished 4th overall. However he kept his eye on the minor prize and secured the KOM competition. It was a similar story in B Grade where Will Lumby secured the KOM title.

In A grade Thomas McFarlane saved his best for last as he took out the stage in a bunch sprint. However the overall winner of the Tour was Cyrus Monk from the Warragul Club.

Next Saturday racing will be at Leongatha North. On a sadder note the club mourns the loss of a founding member, life member and former club treasurer. Jack Edney served the club for 40 years as treasurer and was the Cycling Australia Volunteer of the Year recipient in 1999.