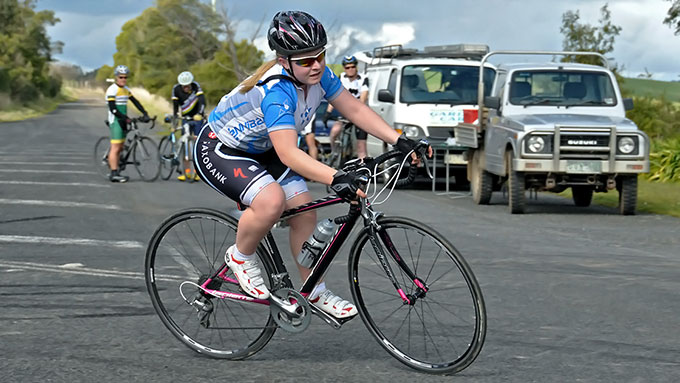 Felicity in action during the junior handicap. (33 event images)

Conditions were excellent for criterium racing at Bena on Saturday, with seniors graded into A and B grades and the juniors riding an 8 lap handicap over the 1.8 kilometre undulating, ‘hot dog’ circuit. Criterium racing doesn’t suit a lot of riders and the senior numbers were down to 11 riders in the two senior grades.

The juniors were on the course first for their eight lap handicap race. Their handicaps were Felicity Waddell on three minutes followed by Kaleb Jans (1.5min) Thomas Fitzgerald (45sec) and Oliver McLean on scratch. Felicity was not finding the course to her liking and was fading when caught by Kaleb early in the race. By the half-way point Oliver had caught up to Thomas who had dropped his chain on a corner and were riding together for a while with Kaleb was holding his own, still out in front. Although Oliver was trying hard to bridge the gap to Kaleb, it was Kaleb who went on to win from Oliver, with Thomas third and Felicity fourth.

Bernadette leading B grade with one lap to go.

The seniors A grade criterium was 30 minutes plus three laps and B grade 25 minutes plus three laps. It was A grade away first with just three riding, Will Lumby, Kevin Feely and Leigh Stott. They were followed by B grade that included Rob Waddell, Brad Bouquet, Kerry Pritchard, Neil White, Mark Bensley, Steve Wilson Bernadette Fitzgerald and Dane Herbert. Apart from Brad puncturing on the first lap and Dane losing early contact in B grade, both grades stayed together in their respective groups for most of the race. With B grade finishing first, it was Bernadette emerging clear from the bunch towards the finish and winning from Rob in second, Kerry third, Mark fourth, Steve fifth, Neil sixth. A grade had still to finish and with four laps left, Will made his move from his rivals with strong riding over the remaining laps. It was Will winning comfortably with a sprint between Leigh (second) and Kevin for the minor places.

On Saturday night two of the Club’s young talent had excellent results in the Winter track series at DISC Velodrome, Thornbury. Thomas McFarlane with his co-rider Ryan Schilt won the 100lap Madison and Austin Timmins was 2nd in his 16laps points race.

Next week the racing is at Outtrim with the finish on the top of Mt.Misery.
report by Lynton 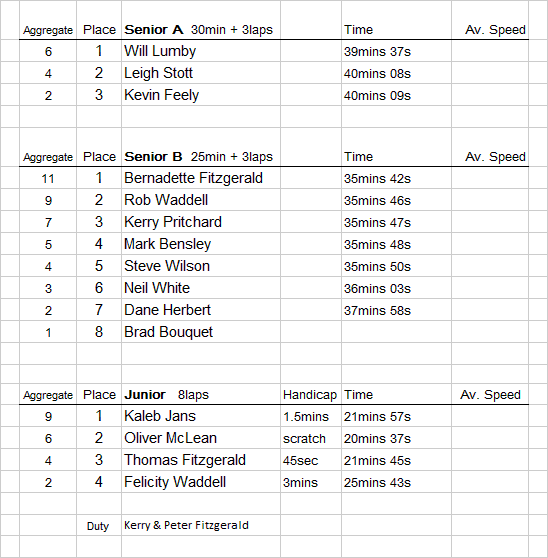