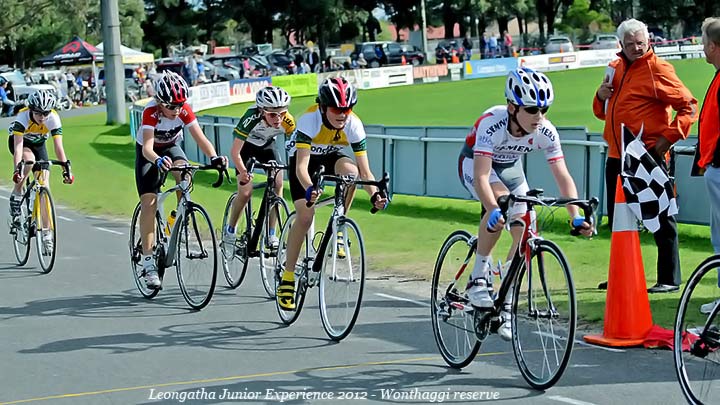 The annual staging of the junior experience weekend at Wonthaggi on Saturday and Outtrim on Sunday was lucky with the weather as the change passed through on Friday evening leaving a sunny and windy day for Saturday racing at the Wonthaggi Recreation Reserve. This year the club welcomed the Inverloch Community Bendigo bank on board as major sponsor for the long running event.

The Saturday racing involves 4 events for competitors – a time trial, straight line sprint, a criterium and a scratch race. The weekend is aimed at new riders to the sport and the various events (6 over the weekend) give a wide range of starters a chance to grab some glory. There were almost 80 starters for the racing.

Leongatha had a number of starters and in the Men 15 division Will Lumby grabbed a win the B grade criterium whilst Austin Timmins had to settle for second in this race. Alex Bennett, Aaron Fraser and Matt Winchester found the imports too slick for them.

In the Under 17 division, Matt Minogue also had a battle on his hands, however, club mate Thomas McFarlane was right on track. He won all 4 events in a dominant display. His win in the last event – a scratch race was perhaps his best. With one rider managing to race clear with 3 laps to go and opening up a gap of around 80m it was left to McFarlane to do the chasing. He set out in pursuit but found he had another rider getting a lovely sit whilst he did all the work. With around 100mm to race the reeled in the leader and at this point Thomas was challenged by the rider who had drafted for almost 3 laps. However a fighting last 100m saw McFarlane ride the challenge of as he claimed a most creditable win.

Sunday morning saw the riders assemble at Outtrim for the hill climb championships. Fortunately it was fine and with little wind. Austin Timmins rode well for second in the Under 13 B grade race whilst Thomas McFarlane had to settle for 3rd in his under 17 title race.

After this effort it was time to contest the road handicap events. In the Under 13 division we had 4 starters and the best placed was Austin Timmins who was in the fast finishing bunch that contested for 2 and 3 places. After doing plenty of work out the road to close down the gaps Austin missed the moves at the finish and missed the podium.

In the Men 17 race Matt Minogue found he was caught by the riders in the winning bunch but was unable to match their intensity. However he still raced to the finish well to grab 4th place. Thomas McFarlane had a difficult task from the scratch mark and had to settle for 2nd fastest time for the day. 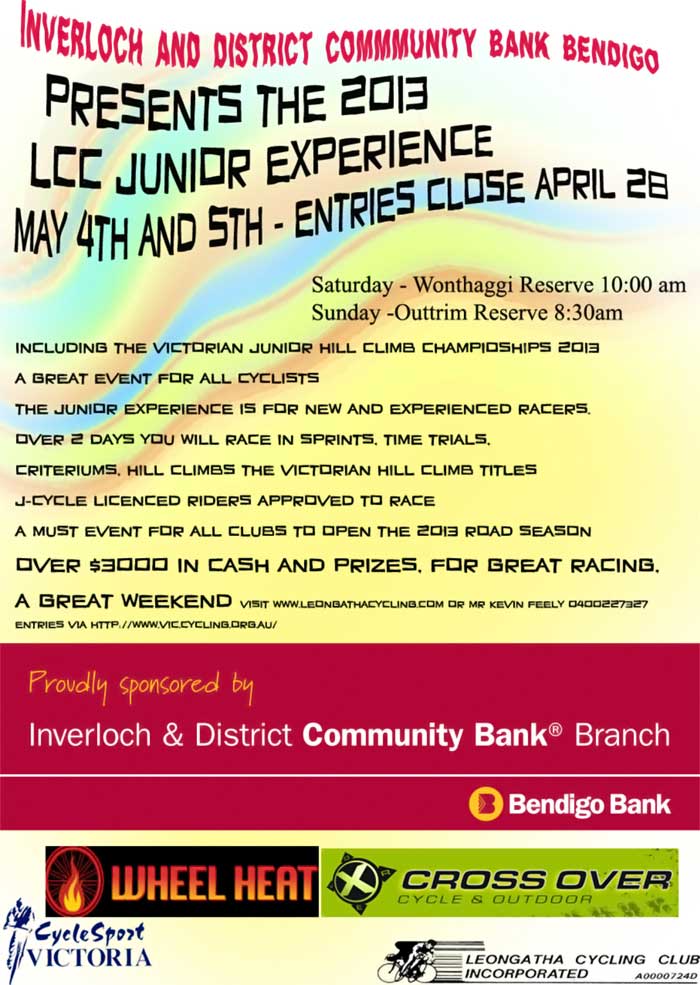 Please note for all events – It is the rider’s responsibility to be in the right place at the right time.

As racing will be run throughout the day (apart from a brief lunch break), it is recommended that riders take lunch between their events.

Presentations will be done at the end of racing. 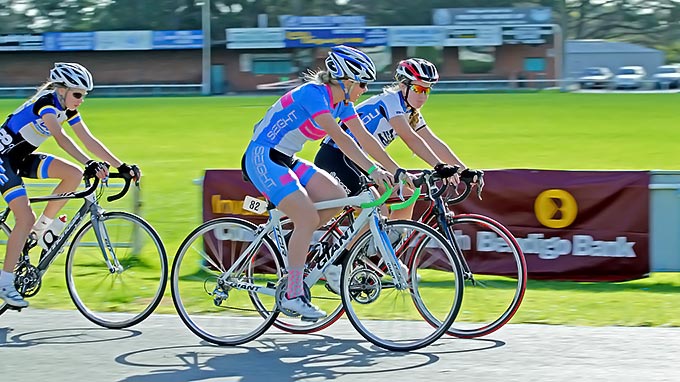 Women’s U/17 scratch race.
The annual staging of the junior experience weekend at Wonthaggi on Saturday and Outtrim on Sunday was lucky with the weather as the change passed through on Friday evening leaving a sunny and windy day for Saturday racing at the Wonthaggi Recreation Reserve. This year the club welcomed the Inverloch Community Bendigo bank on board as major sponsor for the long running event. …continue reading Lindsay’s report.Wonthaggi and Outtrim Images

Digital print version of the images are available with the compliments of the Leongatha Cycling Club.

Still no results available -rests with Cycling Victoria. (only 2012)
…received a reply to say that they (CV) will have them up by the end of last week.
“We only received manual results from the commissaires”