The Club had great weather for their annual promotion of junior road racing with great support from the principal sponsor –the Inverloch branch of the Bendigo Community Bank – and a good turnout of Club members as officials/helpers for all the racing and canteen duties. The Club had a good number of riders including several novice riders having their first taste of competition at a wider level than just Club racing.

The weekend features a 4 event Saturday at the Wonthaggi Recreation Reserve where riders try their luck at a time trial, a straight line sprint, a criterium and a scratch race. The Sunday sees racing relocate to Outtrim where the first order of the day is the State Hill climb Championship races up Mt Misery, followed by a road handicap race. There were riders from Warragul, Geelong, Ballarat, Bendigo and all the City clubs. Racing was for the following age groups, for both boys and girls – Under17, Under15, Under 13 and Under 11 years. All the race results are listed on the Club facebook page and web site.

Our more seasoned riders had a really successful weekend whilst our new riders to the sport had a great time trying the events and feeling they can be a part of the activities. All came away with some reward for the weekend. Whilst our riders who had success at the recent Country Titles were all to the fore again, the addition of some metro riders added another layer to the competition.

Austin Timmins (Men 17) was the best performer over the weekend winning the time trial, criterium, scratch race and straight line sprint, however on Sunday he had another rider to contend with and had to settle for 2nd in the Hillclimb and 3rd in the road race. However it was great performance over the 2 days. Zach Stubbs-Taylor was 2nd in the B grade M17 hill climb.

In the Women 17 division, Grace McLean also performed really well but had a National Track champion to contend with. Her efforts on Saturday yielded 2nds in the Time Trial, Sprint, criterium and 3rd in the Scratch race. On Sunday she did not contest the Hillclimb but again took second in the Road race. Felicity Waddell of the Warragul club was third in the Hillclimb and 3rd in the road race. 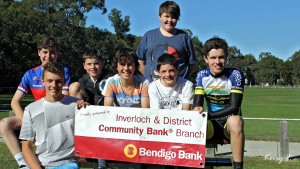 Over the weekend there was track racing on Saturday night at the Disc indoor velodrome in Melbourne. Thomas McFarlane was back in action and won the Kierin and Sprint events. This night of racing also robbed the junior event of some competitors in the Under 17 division.

Next weekend the Club racing is at Bena for criterium racing along the section of old highway just to the east of the town. This is a tough course and will see some graded scratch events. The Club expects some of the Warragul riders to attend so the numbers should be good in the various grades.