Scratch trio of Stefan, Will and Brett.

Racing was at Kernot on Saturday and riders had to battle very strong, gusty north west winds with the early afternoon temperature around 19C before dropping to just 13C making it a prety tough day for racing.  There were 20 starters for the senior race but only 17 finishers and the lone out-markers had a very hard ride.  As expected the windy conditions favoured the back-markers – the scratch trio of Brett Franklin, Stefan Kirsch and Will Lumby and the 3 minute trio of Peter Hollins, Harrison McLean and Chris Rowe.  The race was over 2 laps of the 26km circuit from Kernot, through Woodleigh, St Helier and Almurta and includes the stiff climb from Woodleigh up to the ridge line above Grantville.

After the first lap the 13min bunch had just 3 riders left and it was similar situation for the 8 min bunch.  With 6 back-markers working together really well there was just 1 rider left in front as they swung toward Woodleigh for the final time.  Up the hills the back-markers shed the passengers including last week’s winner – Chris Rowe.  As they headed across the ridge there were just 5 riders left.  In the sprint to the line it was just the scratch trio contesting and Will Lumby took a 1 length win and fastest time(1hr24.52min) over Brett Franklin and Stefan Kirsch.  Next in was Harrison McLean just ahead of Peter Hollins.  The field then finished in ones and twos.  Dan Bowler rode really well to come home alone in 6th whilst Sam Warren had a good workout ahead of next weekend’s 3 day tour with 7th.  Chris Rowe was 8th and limit rider Dane Herbert showed continued improvement to take 9th.  Morgan Barnes rounded out the top 10.

Max and Sullivan competing in the junior event.

The juniors raced over 16.5km out and back on the Kernot Rd so they had plenty of small hills and open road where the wind took its toll.  Kaleb Jans had made up most ground after the first 4.5km but still had plenty to chase down to the outmarkers – Sulli Herbert, Max Slinger and Alfie Herbert.  Sulli was not helping his cause by not staying with his co-marker whilst the back markers were slow to get together and chase.  With a long straight flat stretch up to the Woodleigh corner Kaleb was able to sight the out-markers and chase them down and then defy the back-markers on the run back to the finish to take out a clear win (42.55 min).  Oliver McLean won the sprint with Thomas Fitzgerald and also took fastest time – 40.37 min.  Alfie Herbert was home in 4th, Max Slinger 5th and Sulli Herbert 6th.

Next Saturday the Club will host the first stage of the Gippsland 3 day tour for the senior riders.  The Club junior riders will have club racing in the afternoon as part of the days racing.  Thomas McFarlane and Austin Timmins were again in action with track racing in Melbourne over the weekend. 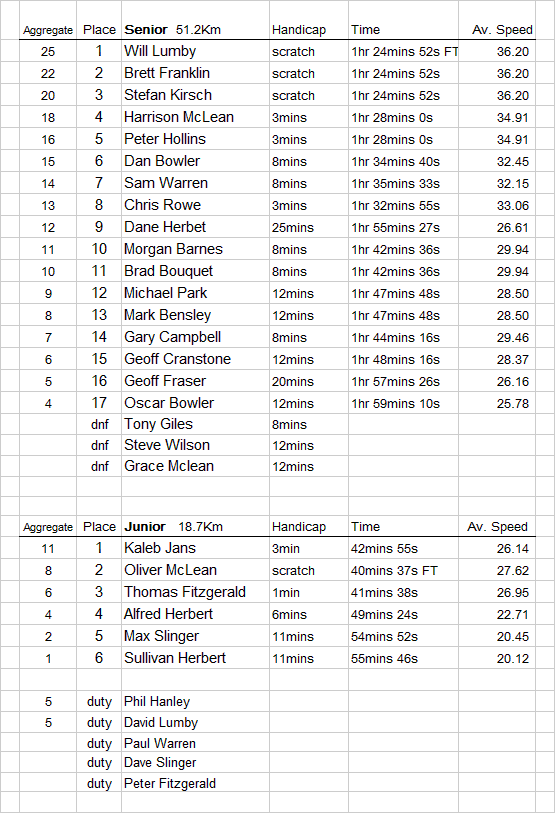