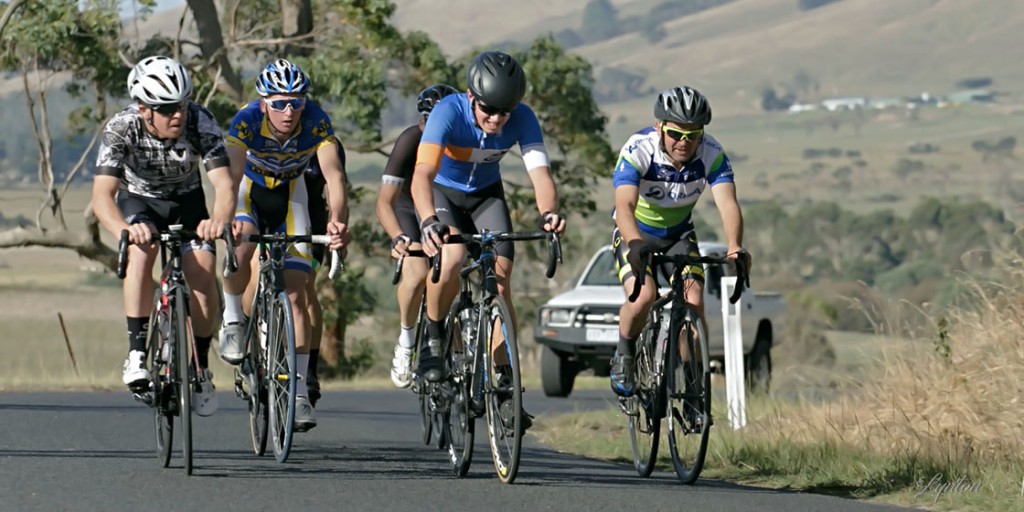 Scratch and 4min riders pick-up limit on the climb out of Woodleigh – second lap. (55 event images)

Club racing was at Kernot on a warm and windy Saturday afternoon.  The racing finished just before the cold and wet front blew in so riders were able to enjoy the 27C day.  The club welcomed some Warragul riders along with some Caulfield-Carnegie juniors checking out the course prior to the end of the month Junior Tour.

In the A grade field there were 19 riders with a 4 strong scratch bunch chasing 7 riders on 4 minutes, a further 4 riders on 10 minutes, 2 riders on 14 minutes and 2 limit riders on 22 minutes.  The race involved 2 laps of the 26km circuit from Kernot out through Woodleigh, up the hills to St Hellier before riding the ridge back through Almurta and past the reservoir to Kernot.  The hills brought plenty of the riders undone along with a stiff northerly wind.

By the end of the first lap, the limit riders and other out markers were basically caught whilst the large 7 minute bunch and the scratch bunch had also disintegrated first with the climb and then with pressure from Shane Stiles (Scr) (Warragul) and Brett Franklin(Scr).  Only Oliver McLean (4min) and Peter Hollins (4 min) managed to get anywhere near going with them up the climb on the second lap.  At the end, Oliver McLean who had a dominant ride, took out the sprint from Shane and Brett.  Peter Hollins followed in a further 2minutes down.  The Caulfield-Carnegie riders Ryan Koroknai (4min) and Connor Bagot (4min) were close behind in 5th and 6th respectfully.  Rob Monk (Warragul) (4min)and Chris Rowe (10min) were next in for 7th and 8th. Kerry Pritchard (14min)rode well with the climbs suiting his fitness to claim 9th whilst rounding out the top 10 was Harrison McLean (scr).  Fastest time went to Shane Stiles in 1.22.41hr.

In the B Grade race over 1 lap, Xavier Hart from Caulfield-Carnegie gave a 3min start to Nash Snooks (Caulfield-Carnegie), Kaleb Jans, Jack Allen and Greg Bradshaw.  Early in the race, the front quartet rode together but just after the Krowera turnoff, Nash Snooks rode away from the other trio and was never headed to take the win.  By the time the field reached the downhill run to Almurta, Xavier had moved into second but still had a gap to chase to Nash and that proved to be about 250m too much. Xavier took 2nd and fastest in 53 min whilst Jack Allen finished well to claim 3rd ahead of Greg and Kaleb.

Next weekend the Club does not have any racing scheduled but riders can head to Warragul on Saturday for a teams race.  The weekend after Easter the Club race will be at Poowong. Juniors are reminded to get their entries in for the Junior Tour.