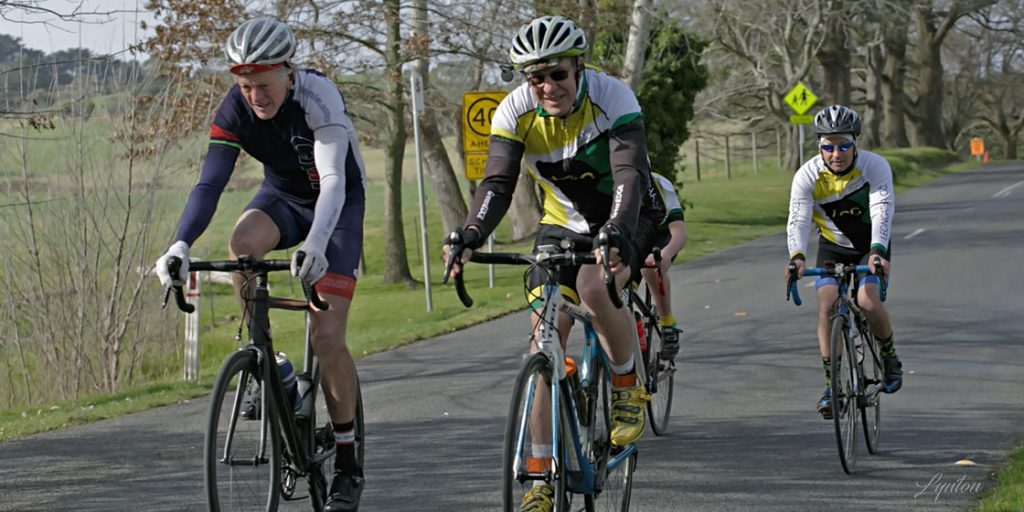 Club racing started at Kongwak on Saturday with riders racing up the Bena Rd before turning and heading across the ridge past Jeetho to the Wonthaggi Rd and then return.  This outward journey included the 3km climb up to the ridge line. Normally it would have been a testing ride but a roaring westerly wind across the ridge top meant the riders had to really battle to make it to the half way point.

There were 15 riders who fronted for the 42km ride. Felicity Waddell was on limit at 22min and had Rob Waddell ride along to keep her company.  She was chased by 4 riders on 17 min followed by 3 riders on 12 minutes, 3 riders on 6 minutes and a 4 rider scratch bunch of Brett Franklin, Harrison McLean, Oliver McLean and Will Lumby.

The 3km climb and wind meant there was a fair change in arrangements by the time the riders reached the turn.  Out front, Rod Cheyne had left the 17 min bunch and had a minute break on another keen on the hills – Kerry Pritchard.  A further minute saw the balance of the 17 min bunch and the balance of the 12 minute bunch make the turn.  Next through were Leigh Stott and Damien King from the 6 minute bunch but they were 6 minutes behind Rod Cheyne and he was enjoying a tail wind on the run back to Kongwak.  At 8 minutes down the scratch bunch arrived but Will Lumby was not there.  The other 3 riders are small in stature and Will quite a bit taller and the windy conditions meant Will was more exposed and hence suffering .

The run back to the finish saw Rod hang on to win by a minute from the chasers.  Brad Bouquet had the best legs for the uphill dash to the line and took 2nd just ahead of Mark Bensley whilst Kerry Pritchard was there for 4th.  Next in was scratch with Harrison McLean taking 5th and fastest -1hr 7 min 58 sec for the 42 km.  Brett Franklin was 6th, Oliver McLean 7th, Leigh Stott 8th and then a gap to Damien King in 9th and rounding out the top 10 was Morgan Barnes.

Next week the club will be back at the Korrine circuit for the running of the Sprag trophy.  The circuit has been out of use whilst the round-about works at West Creek were undertaken.  The monthly club meeting will be on Tuesday night.