Whilst the club was able to run a club race on Saturday at Korrine our thoughts were with the other members at Harcourt competing in the State Country Road Titles.  Fortunately the weather was warm and sunny with no wind so it was a great autumn day to be on the bike.  At Harcourt, Austin Timmins and Will Lumby riding in the Under 17 men’s division really found it to their liking – Austin claiming a win Will 2nd place.  Stuart Smith riding in the elite men division also claimed 3rd place.  In the Men 19 division Harry McLean placed 5th, Grace McLean in the Women 17 division placed 5th whilst Oliver McLean, riding in the Men 15 division finished 10th – well done riders.

With a number of our senior members happily pedaling around Italy the result was a reduced field at Korrine.  Brett Franklin and Thomas McFarlane were on scratch and giving 4 min start to Peter Hollins, 7 minutes to another trio whilst at 10minutes there were 6 riders.  The limit bunch stayed together pretty well and shared the work load whilst the backmarkers lacked some bunches to help with the chase.  To make matters worse, the coach had worked Thomas on the stationary bike in the morning so just when he needed to up the tempo in the chase from the Kongwak roundabout he was unable to answer the charge from co-marker Brett.  However, the weight of numbers out front ruled the day and in the sprint to the line Brad Bouquet was too quick for Tony Giles, Bernadette Fitzgerald, Steve Wilson and Mark Bensley.  The winning time was 64.58 minutes.  Next to finish was Brett Franklin in 6th and fastest – 56.39 min.  Next home was Peter Hollins ahead of Phil Hanley.  Thomas McFarlane and rounding out the top 10 was Morgan Barnes.

The junior field of 5 riders saw Thomas Fitzgerald and Mitch Harry on scratch, Kaleb Jans at 4.00min whilst out front it was Felicity Waddell and Michael Eastwood.  The back markers were not teaming very well and only making up limited ground. Kaleb Jans managed to get a sighter of the limit riders as they raced up the McGraw Rd hill and noticeably lifted the cadence.   Out front Michael opened up a gap over the top of the hill but there was still 6km to race.  Up the hill to the Glen Alvie junction, Kaleb rounded up the leaders and rode home a clear winner (42.23min).  Felicity managed to find a good pedaling rhythm and chased Michael down and also rode home in 2nd place.  Michael kept working hard and managed to get to the line for 3rd place just ahead of the scratch duo.  Thomas Fitzgerald took 4th and fastest time – 40.31min

The club has a monthly meeting on Tuesday night and will try a new venue – the Leongatha RSL at 7.30pm.  The Club will need to finalise some arrangements for the Saturday of the June long weekend for the 3 day tour.  Riders you need to come and have your input. 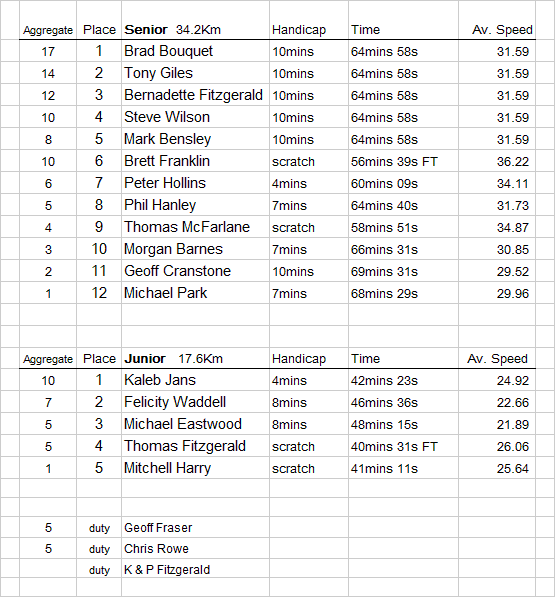