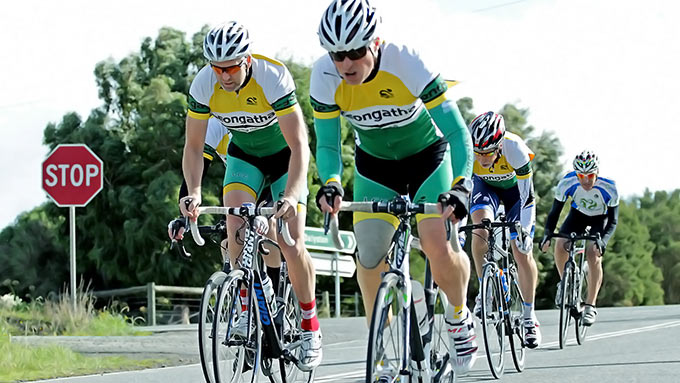 “A bunch of 5 riders off 5 minutes chased hard…”

Fourteen old Thomas McFarlane, competing with the senior cyclists in the 35km Korrine circuit, won by 8 seconds. It was nearly a one two as his father David was pipped at the line by fast finishing Neil White. It was a great day of cycling for our Club with 21 senior cyclists fronting for the 5th race of the road season.

Our handicapper, Steve Wilson, did an excellent job as 18 of the 21 riders finished within 3 minutes of the winner. Only Brett Franklin who rode alone off scratch, complained with the 3 minutes he had to give to the 2nd scratch bunch of 6 riders. Brett was able to make up only 1 minute in the difficult S/E wind but still finished with the fastest time of 58min 16 sec for the 35km course.

A bunch of 5 riders off 5 minutes chased hard and caught the bunch of 5 riders off 8 minutes, which included Neil White, about half way around the 2nd lap. These two groups then rode together until the 3 minute bunch caught them shortly after. This huge group which now totalled 16 riders then swapped turns until the long climb up the hill before the Kongwak roundabout. On this hill the selections started as one rider after another dropped off as the pace quickened.
Those remaining at the front then headed for the steep climb up Gow’s Hill. After one attack after another young Thomas emerged at the top with a handy margin with

“Neil White saw his chance and with good legs was able to out sprint Dave for second.”

his father not too far behind. After the fast descent to the finish Neil White saw his chance and with good legs was able to out sprint Dave for second. Phil Camenzuli was 4th, Chris Rowe 5th, Kevin Feely 6th, David Lumby 7th,

Lachlin Mathews 8th, Jason Scott 9th and rounding out the top 10 was Tony Clark.
Two juniors had a race of 8km out and back which included Gow’s Hill from the north side. Last year’s juniors Will Lumby and Matt Minogue have raced this year with the seniors. Austin Timmins gave Alex Bennett a 3 minute start then was able to beat him home by 26 seconds in a time of 19min 17seconds.
After the race president Kevin Feely thanked the number of riders for coming who raced for the first time this season. He then thanked Stu Smith and Damian Crowe for doing corner duties. Thanks again to Jim Geary for helping run the race. Next Saturday will be the first race of the season where everybody is off scratch, in either A or B grade around 2 laps of the Pound Creek circuit in the McIndoe Cup.