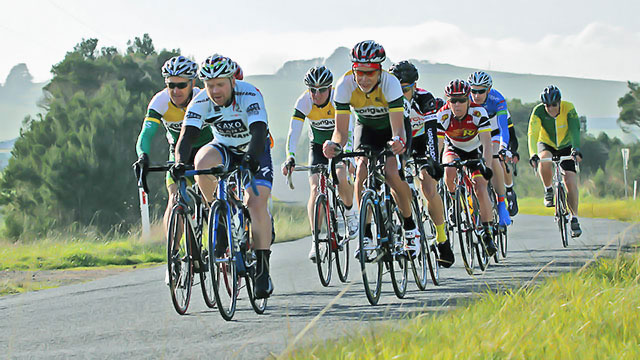 Another great winter Saturday saw the club hold the Club Road championship around the Korrine circuit. However, Saturday was also the first day of the school holidays so there were a few riders missing. We welcomed back Kevin Feely and Damian Crowe after their 8 weeks riding through Italy and were all a little jealous of their well toned bodies.

The senior title was raced over 57 km – 3 laps of the circuit. This was contested by a great field of very fit riders. The first lap saw Brett Franklin move away on the first small climb along the Lance Creek road. The first run up the hills and cresting out at the Glen Alvie intersection saw Brett holding a lead of 100m followed by a group of 4 riders – Stuart Smith, Ronald Purtle, Peter Hollins and Thomas McFarlane whilst a further gap saw the other 6 riders in a bunch. The second lap saw Brett open the gap to around 200m but the chasing quartet were just about to step it up. By the time the race reached the corner for the run up McGraws Rd there was a leading bunch of 5 riders. Stuart Smith attacked on the long drag up McGraws Rd and established a decisive break. Behind the riders were battling each other and the hills. Brett Franklin managed to draw clear of Ronald Purtle who in turn left the other duo – Peter Hollins and Thomas McFarlane. Chase as they might, there was no change in order and they greeted the judges basically alone – Stuart the champion, Brett the silver and Ronald the bronze. Stuarts time was a slick 1hr 24.18min – just 28 minutes per 19km lap.

Stuart is in great form, just back from a training week at Canberra and also from riding the Tour of the North West – in northern NSW. He is also due to fly out for China to participate in a major tour in western China – the Tour of Quinghi Lake. This will be a great experience and challenge as it is all ridden at altitude – all above 2500m.

The B grade group of 4 riders raced over 2 laps. This is the group who missed several riders. However, there was a steady pace set by Brad Bouquet who is riding in great form. The selection in this race also occurred on the MGraw Rd hill with Brad Bouquet attacking and splitting the field with only Will Lumby staying with him. Will has shown the benefit of riding the 3 day over the long weekend so was handling the challenge of the hills with ease. In the dash to the line Brad lead out but Will zipped around to claim the win. Next home was Steve Wilson and then Tony Giles. Wills time was 1hr06.36min.

The Junior club title was ridden over 1 lap and again the McGraw Rd hill saw Matt Minogue and Austin Timmins with a break over Aaron Fraser. This duo rode together to the dash for the line. The down hill run before the finish saw Matt gain the advantage which he held to the line to claim the win from Austin and Aaron. Matts time was 35.26min.